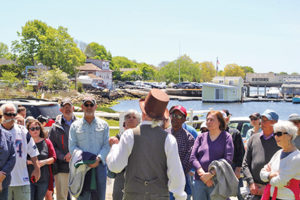 Fairhaven Director of Tourism Christopher Richard talks about the history of “Poverty Point” during a walking tour on Saturday, 5/18/19. Photo courtesy of Robert Pina.

Fairhaven’s historical “Poverty Point” neighborhood was the scene of a newly revised walking tour pre­sented by the town’s Office of Tourism on Saturday, May 18. Guided by Christopher Richard, the tour began at Cooke Memorial Park on Pilgrim Avenue.

This walking tour, outlining the history of the people and events in Oxford Village, the oldest village area in present-day Fairhaven, was first created in 1995 by the late Natalie S. Hemingway, who was a volunteer with the Fairhaven Tourism Commit­tee at the time. That basic walk with slight modifications has been offered to the public a number of times over the last twenty-plus years. Since the tour was last presented in 2017, Mr. Richard, the Tourism Director for Fairhaven, has revised and updated the walk along a new tour route.

This area, once known as “Ye Little Town at Ye Foot of William Wood’s Homestead,” and later “Oxford,” got the nickname “Poverty Point” around 1810, but the downturn of fortune was short-lived.

On the tour walkers heard about the old burial ground and the mysterious human remains dug up in 1902, and what was once called “the most pretentious dwelling in the village.” Walkers also learned about the some of the people who brought worldwide fame to Fairhaven.

The land was once owned by Thomas Taber, the son-in-law of Mayflower passenger John Cooke, and the remains of Taber’s house still stand more than 340 years later. 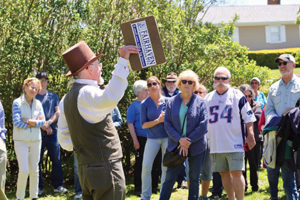 Fairhaven Director of Tourism Christopher Richard talks about the history of “Poverty Point” during a walking tour on Saturday, 5/18/19. Photo courtesy of Robert Pina.

The neighborhood was where Joseph Bates, founder of the Seventh-day Adventist Church, grew up and it is where Manjiro Nakahama first stayed when he was the first Japanese person to live in America. Capt. Joshua Slocum rebuilt the sloop Spray here before sailing it alone around the world. The neighborhood was also the home of artists including Charles Gifford and Lemuel D. Eldred.

Often considered for Historic District designation, the Poverty Point area has about a dozen 18th Century homes, dating from 1742 to the 1790s. 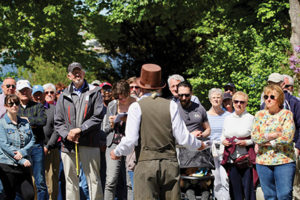