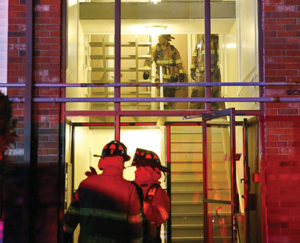 Fairhaven Firefighters respond to a kitchen fire in an apartment at McCormack Manor on Washington Street on 2/9/19 at around 6 p.m. Photo courtesy of the Fairhaven Fire Department.

At 6:07 p.m. on Saturday, 2/9/19, Fairhaven firefighters received a fire alarm box for McCormack Manor, at 157 Washington Street. Almost immediately after receiving the alarm, 911 calls were received reporting a fire in apartment 110.

Two engines and an aerial ladder responded. First arriving crews found heavy smoke coming from the rear of the multi-unit three-story apartment building. Firefighters made a quick entry and discovered the kitchen of the first floor apartment well involved in fire.

Firefighters rescued a 66-year-old male victim from the apartment. The victim suffered from burns and smoke inhalation and was rushed to St Luke’s Hospital. The patient was in serious condition on arrival at St Luke’s and was later transported to Massachusetts General Hospital by Boston Medflight. 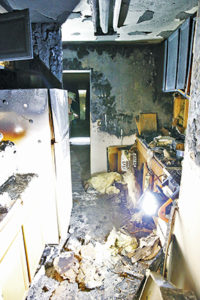 A fire has destroyed this kitchen in an apartment at McCormack Manor on Washington Street in Fairhaven on 2/9/19 at around 6 p.m. Photo courtesy of the Fairhaven Fire Department.

The fire was contained to the single apartment on the first floor, but the second and third floor apart­ments suffered smoke damage.

In addition, at the same time, firefighters were battling the fire and providing medical care to the victim, two other calls for EMS service occurred. Acushnet Fire Department provided mutual aid for station coverage, and automatic aid for EMS response to one of the runs, while off duty Fairhaven Firefighters responded to the second EMS call for service.