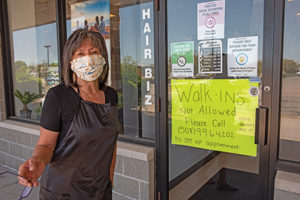 Rose Dutra, owner of Hair Biz in the Walmart plaza in Fairhaven stands by the door of her salon with the sign noting that walk-ins are not longer allowed, on 5/26/20, the second day that Hair Salons were allowed to open under the Phase 1 re-opening guidelines announced by Massachusetts Governor Charlie Baker last week. Photo by Glenn C. Silva.

Rose Dutra’s Hair Biz in Fairhaven is just about ready to celebrate 40 years in business. But there won’t be any big get-togethers, thanks to COVID-19 and the resulting restric­tions. The business has, however, been allowed to re-open and she’s hopeful that it will be open for the June milestone.

The business was ordered closed in March by Gov. Charlie Baker, along with almost all businesses in Massa­chu­setts. Hair salons were allowed to open on Monday, 5/25, but with a boatload of restrictions and regulations in place.

“It’s overwhelming and exhaust­ing,” said Ms. Dutra, who got emotional as she described the experience as being so different from what she had worked for decades to build up in her place. “It was so impersonal. Everything is such a change.”

On Facebook she posted an apology to her customers for the impersonal service.

“Wait outside, wash your hands first thing, don’t touch this, don’t touch that, wear a mask, no beverages, no socializing while processing (have to socially distance, go outside to take the mask off and get air) pay and get out! Spray, wipe down everything! Thank you thank you all! It will get easier! First day success!”

By phone the next day, Ms. Dutra said it was “such a change” from what her business was just a few weeks ago.

“Not to mention you’re afraid of catching the stupid COVID, after we’ve been sheltering in place for two months,” she said.

The clients were good, though, nobody gave her a hard time, the were all compliant. But it all took a lot of time, getting set up in the first place, and taking care of each client.

They even have to pay while being serviced. One person takes the payment, while the stylist works on the hair. 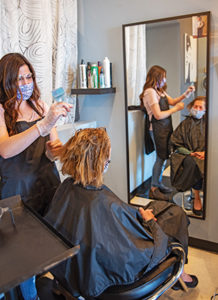 Angela Massa of Hair Biz in Fairhaven takes care of Ginger Daniels, one of the lucky clients to get in on 5/26/20, the second day that Hair Salons were allowed to open under the Phase 1 re-opening guidelines announced by Massachusetts Governor Charlie Baker last week. Photo by Glenn C. Silva.

“It’s just horrible,” she said. “I hate doing business like that.”

She misses the short time she had with her clients as they paid and lingered a bit on their way out the door. She misses seeing the clients visit with each other while they are waiting, and chatting with each other under the dryer.

“There’s no interaction like that,” she said. “It’s just business.”

Then there’s the social distancing inside the salon. She’s at half capacity, and she’s not sure the business will be able to survive that.

“It’s going to be tough. I don’t know yet. We’ll have to see what the numbers do,” she said.

She is, however, booked solid.

The landlord, though, made it clear from the start they he would not be giving any breaks on the rent.

The first day back was also physically exhausting, she said. After all, she’s been off for about 30 days, and notes that she’s 63 years old. And it all came after a “crazy” week trying to get the salon ready for customers with all the restrictions. She said she did not expect salons to be included in the first phase.

“Everybody was happy, everybody was compliant,” she said, thanking her clients for being so accommodating. 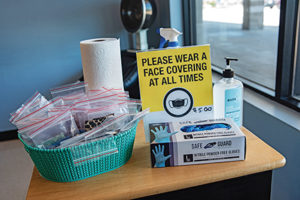 Masks, gloves and hand sanitizer greet clients as they walk through the door at Hair Biz in Fairhaven on 5/26/20, the second day that Hair Salons were allowed to open under the Phase 1 re-opening guidelines announced by Massachusetts Governor Charlie Baker last week. Photo by Glenn C. Silva.