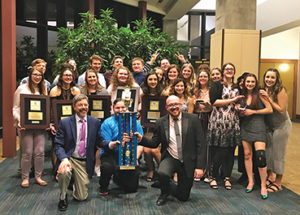 Students from Fairhaven High School and their teachers pose with awards they won at the WorldStrides OnStage Music Festival in Washington, DC, in April, 2019. Photo submitted.

The Fairhaven High School Music Department had a successful week­end in Washington, D.C. last month, when it collected numerous awards and accolades at the WorldStrides OnStage Music Festival.

The Festival was a chance for FHS Music students to showcase their talents and compete against other high school music students from across the country.

The already well-decorated program was proud to return home with numerous awards. The Concert Choir and Treble Choir had the most success, both earning Gold Awards along with an invitation to perform at Carnegie Hall. The Jazz Band also received a Gold Award for their performance, and the Concert Band and Orchestra were each recognized with a Silver Award.

While the group and individual awards were special to FHS Music, the highlight of the trip was being presented with The Festival Sweep­stakes Award. This prestigious award is earned by achieving the highest overall combined score across both instrumental and choral ensembles.

Along with the great pride that came from being named the recipients of The Festival Sweep­stakes, FHS Music was recently invited to the Emerald Isle Music Festival, an invitation-only festival for Festival Sweepstakes Award winners.

Despite the competitive nature of the trip, FHS Music still managed to enjoy and educate themselves while visiting the Nation’s capital. Some of the highlights from the trip were: Singing the National Anthem during a flag raising ceremony at the exact spot that the poem was written, experiencing the performance of “Into the Woods” at Ford’s Theatre and “Shear Madness” at the Kennedy Center, an Arlington National Cemetery Walking Tour, witnessing the changing of the guards, sightseeing and much more.