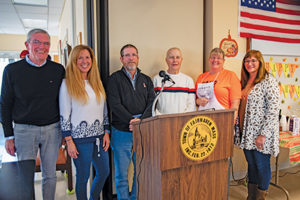 Board members of the Fairhaven Father’s Day Road Race take a minute to be recognized at the volunteer appreciation luncheon at the Fairhaven Senior Center on Sunday, 11/3/19. Photo by Glenn C. Silva for the Neighb News.

The Fairhaven Father’s Day Road Race handed out checks at its annual luncheon on Sunday, 11/3/19, at the Fairhaven Senior Center. Dona­tions to 35 local organizations totalled $21,700 this year.

Race founder Allen Days told the group of volunteers, friends, family, and organization representatives that the race has donated more than $250,000 over the past 45 years.

Mr. Days thanked the volunteers, and the board, which was only created a few years ago when he decided to step back a little. The race has to cap participants now, and routinely has more than 1,000, sometimes more than 2,000. 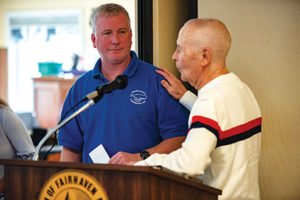 Allen Days gives some extra praise to Chauncey Burr and the Boy Scouts of Troop 55 in Fairhaven, which received a $500 donation from the Fairhaven Father’s Day Road Race at its volunteer appreciation luncheon at the Fairhaven Senior Center on Sunday, 11/3/19. Photo by Glenn C. Silva for the Neighb News.

He also thanked the town and the various depart­ments that help make the race possible, such as the police and fire, Fairhaven Emer­gency Manage­ment Agency, and pub­lic works depart­ment. The event begins and  ends at Hastings Middle School, so the school department also got a big shout-out.

Fairhaven Dollars for Scholars received $1000 that will go directly for scholarships to high school seniors.

Anne Silvia, director of the Fairhaven Council on Aging, said they would use their $1,000 donation to install a new built-in water cooler, the kind that people can use to fill up a large water bottle.  The senior center has no water cooler now, the two old-style “bubblers” have been out of order for years.

Ms. Silvia told the Neighb News that she had priced out a water cooler, and it came to just about $1,000. But there is no money in the budget for those kinds of things, she said. 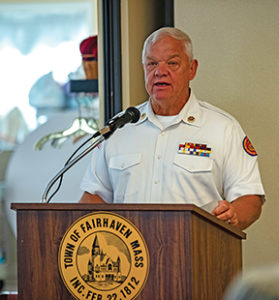 US Marine Corps Veteran and representative of the Greater New Bedford Marine Corps League Rick Seguin addresses the group after accepting a donation for the GNBMCL at the Fairhaven Father’s Day Road Race volunteer appreciation luncheon at the Fairhaven Senior Center on Sunday, 11/3/19. Photo by Glenn C. Silva for the Neighb News.

Rick Seguin accepted $500 for the Greater New Bedford Marine Corps League, and made sure to let everyone know that they should be proud of Fairhaven. He said when the Marines held their convention in town last year, he got only good reports.

“We put on a really good convention,” said Mr. Seguin, adding that people were very impressed with the history of the town, too, and have visited again because of how friendly people around town were. “You can be very proud ot that.”

Charles K. Murphy, who is also the Selectboard chair in Fairhaven, accepted $300 for the MO LIFE food pantry. Usually, they use the annual donation to buy turkeys for Thanksgiving, but this year, he said they will need it for a regular food shipment as well. The pantry missed a shipment from the Boston Food Bank due to a clerical error very recently.

Sherry Lopes, who accepted the donation for the Dollars for Scholars program and the Curtis Lopes Scholarship Fund, named for her late brother, told the group that the family has appreciated the support over the years. It helps to keep his memory alive, she said.

She said she recognizes all the hard work involved, and how much the race has given back to the community over the years. 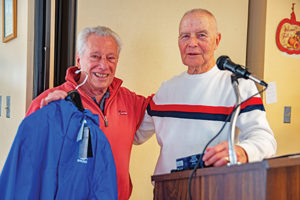 L-R: John Medeiros accepts a jacket at a volunteer appreciation luncheon on 11/3/19 from Allen Days on behalf of the Fairhaven Father’s Day Road Race to show appreciation for Mr. Medeiros’s many years of volunteer work with the race. Photo by Glenn C. Silva for the Neighb News. 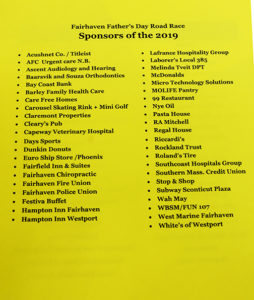 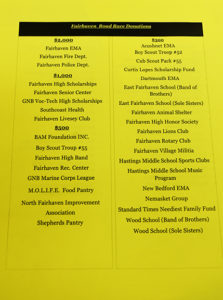