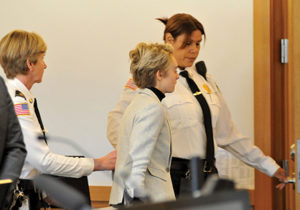 Michelle Carter, 22, appears in Taunton District Court in Taunton, Mass. Monday, February 11, 2019 for a hearing on her prison sentence. Carter was convicted in 2017 of involuntary manslaughter and sentenced to a 15 month prison term for encouraging 18-year-old Conrad Roy, III to kill himself when she instructed him over the phone to get back in his truck that was filling with toxic gas in July 2014. Her sentence was put on hold while the court reviewed the case and the defense argument that her actions were not criminal. Her conviction was upheld. She is being led away by court officers after the hearing. (AP POOL/Mark Stockwell)

Michelle Carter, 22, the Plainville woman who was convicted of involuntary manslaughter in the suicide death of Conrad Roy III, reached the end of her options to avoid jail time and started serving her sentence at the Dartmouth House of Corrections on Monday, 2/11/19.

Ms. Carter was sentenced to 2.5 years in the HOC, with 15 months suspended and 15 months to be served. Juvenile Court Judge Lawrence Moniz stayed her sentence while her appeals were being heard in Massachusetts. The judge made it clear in his ruling in August of 2017, that he was allowing Ms. Carter to stay out of jail only during the in-state appeals process. 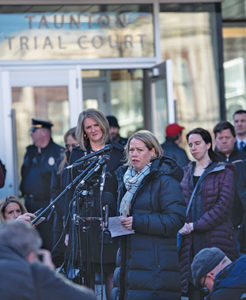 Bristol County prosecutor MaryClare Flynn (LEFT) listens as Becki Maki, Conrad Roy III’s aunt, speaks to the press on 2/11/19 after Michelle Carter was taken into custody to start serving her 15-month sentence in the Dartmouth House of Correction for involuntary manslaughter in Mr. Roy’s suicide.. Photo by Glenn C. Silva.

Mr. Roy was found in his pickup truck in the Kmart parking lot in Fairhaven on July 13, 2014, with a spent gas-powered water pump in the cab with him. He died of carbon monoxide poisoning.

The Mass. Supreme Judicial Court upheld Ms. Carter’s conviction on 2/6/19. The Bristol County District Attorney’s office immediately filed a motion to revoke the stay and have her remanded to custody.

Mr. Cataldo told the court that the case is “legally not over.”

He said there is a “split among courts” that have handled cases similar to Ms. Carter’s. He said her direct appel­late review is going to the US Supreme Court, there are legal issues that are still relevant, and many of those legal issues are federal issues. He cited a couple of cases that disagree if advising suicide is a crime or not.

Judge Moniz asked if there were any other issues to bring up on either side, but both the defense and the Commonwealth had clearly had their say.

He said he had reviewed the Commonwealth’s motion and the order he issued in August, and considered it all.

“Ms. Carter will now be taken into custody,” said Judge Moniz, and “the matter is adjourned.”

Ms. Carter, who was 17 at the time of the crime, had cut her hair and was dressed in a cream-colored suit jacket with elbow patches, looking much more like a 20-something professional adult than the teenager the defense tried to show to the court and the world during the trial.

She did not speak, but looked a bit nauseated during the whole proceed­ing, standing up immedi­ately, even before, the judge spoke the words for her to be taken into custody. She rose from her seat and was led out of the courtroom by court officers, but not handcuffed.

Her parents were seated two rows behind her, but it appeared from the back of the courtroom and from subsequently released news video, that she did not look back at them.

Seven court officers lined the court room on both sides. Mr. Roy’s family was there in force, taking up at least two rows. Ms. Carter’s supporters were somewhat dwindled from the days of her trial, with her parents and maybe one or two others showing support outwardly.

After the court proceedings, Bristol County prosecutor MaryClare Flynn told reporters that it was a “long day coming.” She thanked the Fairhaven Police Department for their “tireless efforts” and all the “work and dedication” they put into the case. She noted that the case was almost five years old.

“As always, our sympathies remain with the family of Conrad Henri Roy III, and we are grateful for the family putting their trust in the Bristol County District Attorney’s Office,” said Ms. Flynn. “We are very content with what happened today in the courtroom.”

Mr. Roy’s aunt, Becki Maki, also spoke to reporters on behalf of the family. She thanked Fairhaven police and the DA’s office, and the court advocate for helping the family understand the court system.

“So this has been a four-year ordeal for our family. It’s been four-and-a-half years since Conrad passed,” said Ms. Maki. “And our heart has been broken this whole time.”

She said it was hard for the family to live out the details of his death over and over.

“And it is something that has affected our minds,” she said, adding that they were happy the proceedings on Monday ended the process for them.

They realize it may go to the federal courts, she said, “But this is the last time we’ll be in this court. This is the day that we have been looking forward to coming to an end of our involvement in this case.”

“We feel justice has been served,” said Ms. Maki. 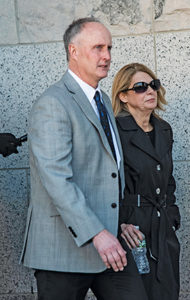 Michelle Carter’s parents, David Carter and Gail Portway, leave the Taunton Courthouse on 2/11/19 after Michelle was taken into custody to start serving her 15-month sentence at the Dartmouth House of Correction for involuntary manslaughter in the suicide of Conrad Roy III. Photo by Glenn C. Silva.

She also said the family knows it is a “novel case,” and that there is a lot of debate on whether or not Ms. Carter should go to jail.

“So we really are grateful to the court for seeing that this is something that shouldn’t have happened,” she said. “And hopefully it will never happen again.”

The case did help the family under­stand why Conrad died, said Ms. Maki. Conrad was in a place where he was recovering from his mental health issues, so reading the text messages helped them under­stand they were part of the reason.

“That he had somebody he trusted and confided in that steered him in the wrong direction,” said Ms. Maki.

“Conrad will be forever missed,” she said, adding that through the case, his story has “touched so many hearts.”

The only good that can come of it is that people who are struggling will know to get help.

“We hope that no one else ever has to deal with this pain,” said Ms. Maki. “His life mattered. It mattered to us, and I think it mattered to a lot of people. Conrad, we love you.”

Ms. Carter’s attorney also spoke to reporters outside the courthouse. He said that he would file an appeal directly to the US Supreme Court. He cited several cases throughout the country that differ in their findings in similar cases.

“Make no mistake, this case is not over,” said Mr. Cataldo, and added later about the courts. “They got it wrong.”

He has, since the beginning, said that Ms. Carter’s texts were protected free speech. He emphasized that she was a teenager who also had mental health issues at the time of Mr. Roy’s death, and that she is a different person now.

Mr. Cataldo said he did not think anyone could be prepared for going to jail for something that she did as a teenager, and that her life has been on hold for four years.

Mr. Cataldo said that although Ms. Carter is a different person now and would never do the same thing, she does not understand how she could be prosecuted for helping Mr. Roy do what he wanted to do. He left her a love note, noted Mr. Cataldo.

“She’s being put in jail for something he wanted,” he said.

He also noted that Mr. Roy told her to delete her text messages, but she did not, because she did not think she was doing anything wrong.

“It was Conrad who told her to delete all the text message,” said Mr. Cataldo. “She said, ‘why’?”

The courtroom proceedings in Taunton ended at 2:05, and Ms. Carter was in Dartmouth at the HOC a little after 3 p.m., according to Bruce Assad, Special Sheriff of Bristol County who addressed the press in Sheriff Thomas Hodgon’s absence just after Ms. Carter’s arrival on Monday.

Mr. Assad said that Ms. Carter would first be in the medical unit on “eyeball watch” 24/7 until it was clear that she would be okay to join the general population. He said they will watch her based on her “age, circumstances and the high profile nature of the case.”

After she is evaluated by the medical and mental health teams, she will transition to the general popula­tion and will be treated the same as everyone else, he said.

According to her attorney, she will be eligible for parole after serving half her sentence, or 7.5 months. Parole is not guaranteed and depends on a number of factors, including what kind of behavior she exhibits while incarcerated.