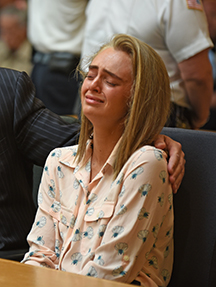 TAUNTON: Michelle Carter reacts as she listens to Judge Lawrence Moniz before he announces his verdict on Friday, 6/16/17.  She was found guilty of involuntary manslaughter in the suicide of Conrad Roy III. Photo by Glenn Silva/Fairhaven Neighborhood News/pool

The Massachusetts Supreme Judicial Court (SJC) has upheld the convic­tion of Michelle Carter, the Plainville woman who was convicted of involuntary manslaughter in the suicide death of Conrad Roy III. The decision was released on 2/6/19.

Mr. Roy was found dead of carbon monoxide poisoning in his pickup truck in the Kmart parking lot in Fairhaven on 7/13/14. A spent gas-powered water pump was inside the vehicle with him.

The case was heard in Taunton Juvenile Court because Ms. Carter was one month shy of her eighteenth birthday at the time of Mr. Roy’s death. She was tried as a juvenile offender, which means she was tried as an adult, so the proceedings were open to the public.

On August 3, 2017, Ms. Carter was sentenced to 2.5 years in the Bristol County House of Correction, with 15 months to be served and the balance suspended with probation for five years (ending 8/1/22). The sentence was stayed pending state appeals.

Now that her state appeals are exhausted, she will have to serve the 15 months in the HOC. She does have one last possi­bility to delay, however. She can request, within 28 days, a review by the court. However, it is unlikely that the court would reverse itself, especially since it is the second time the SJC has heard arguments in the case. The first time was in 2016 (Carter I) when the court found there was probable cause for the case to continue.

In oral arguments heard on 10/4/18 (see 12/6/18 issue of the Neighb News: https://www.fairhavenneighborhood news.com/sjc-has-carter-appeal-under-advisement/), attorneys argued that Ms. Carter was not present when Mr. Roy killed himself and that her texts, emails, and phone calls were pro­tected speech.

The prosecution, as they did at trial and ruled by the judge, stated that Ms. Carter’s actions were “wanton and reckless” and purposely caused the death of Mr. Roy.

In its ruling this week, the SJC affirmed the conviction, writing: “We conclude that the evidence was sufficient to support the judge’s finding of proof beyond a reasonable doubt that the defendant committed involuntary manslaughter as a youthful offender, and that the other legal issues presented by the defendant, including her First Amendment claim, lack merit.”

The court found that the relation­ship between the two was mostly by texts, emails and phone calls. The decision includes samples of their text messages, in which Ms. Carter collaborates with Mr. Roy on how he can kill himself.

“As the victim continued researching suicide methods and sharing his findings with the defendant, the defendant helped plan how, where, and when he would do so, and downplayed his fears about how his suicide would affect his family. She also repeatedly chastised him for his indecision and delay, texting, for example, that he ‘better not be bull shiting me and saying you’re gonna do this and then purposely get caught’ and made him ‘promise’ to kill himself,” wrote the court.

The court also went into great detail about a lynchpin of the lower court’s decision, that in an email by Ms. Carter herself to a friend she says that Mr. Roy got ouf of the truck and she told him to get back in.

“Although we recognize that legal causation in the context of suicide is an incredibly complex inquiry, we conclude that there was sufficient evidence to support a finding of proof of such causation beyond a reason­able doubt in the instant case,” reads the decision. “The judge could have properly found, based on this evidence, that the vulnerable, con­fused, mentally ill, eighteen year old victim had managed to save himself once again in the midst of his latest suicide attempt, removing himself from the truck as it filled with carbon monoxide. But then in this weakened state he was badgered back into the gas-infused truck by the defendant, his girlfriend and closest, if not only, confidant in this suicidal planning, the person who had been constantly pressuring him to complete their often discussed plan, fulfill his promise to her, and finally commit suicide. And then after she convinced him to get back into the carbon monoxide filled truck, she did absolutely nothing to help him: she did not call for help or tell him to get out of the truck as she listened to him choke and die.

“In sum, the evidence at trial, in the light most favorable to the Common­wealth, was sufficient to establish the defendant’s guilt beyond a reasonable doubt.”

Another argument made by the defense was that the juvenile Ms. Carter could not have known that her actions were illegal and therefore her conviction violated her right to due process. She contended that the involuntary manslaughter law is “unconstitu­tionally vague.”

The court rejected that argument.

“‘A statute is unconstitu­tionally vague if [people] of common intelligence must necessarily guess at its meaning,’” wrote the court citing  Carter I.

“It has long been established in our common law that wanton or reckless conduct that causes a person’s death constitutes involuntary man­slaughter,” wrote the court in its new ruling, and cites previous case law defining involuntary manslaughter. “There is no doubt in this case that the defendant wantonly or recklessly instructed the victim to kill himself, and that her instructions caused his death.”

The ruling then cites several cases where coercion and taunting caused a suicide.

“Indeed, the principle that a defendant might be charged and convicted of a homicide offense merely for ‘repeatedly and frequently advis[ing] and urg[ing] [a victim] to destroy himself,’ with no physical assistance, can be found in centuries-old Massachusetts common law,” wrote the court. “In sum, our common law provides sufficient notice that a person might be charged with involuntary manslaughter for reckless or wanton conduct, including verbal conduct, causing a victim to commit suicide. The law is not unconstitu­tionally vague as applied to the defendant’s conduct.”

The court also addressed the free speech claims made by Ms. Carter.

“The only verbal conduct punished as involuntary manslaughter has been the wanton or reckless pressuring of a vulnerable person to commit suicide, overpowering that person’s will to live and resulting in that person’s death. We are therefore not punishing words alone, as the defendant claims, but reckless or wanton words causing death. The speech at issue is thus integral to a course of criminal conduct and thus does not raise any constitutional problem,” wrote the court, and then addressed concerns that bedside, end-of-life suicide discussions could be criminalized, specifically noting that this case does not involve those situations, or general discussions about euthanasia or suicide.

“We emphasize again, however, that the verbal conduct targeted here and in our past involuntary man­slaughter cases is different in kind and not degree, and raises no such concerns. Only the wanton or reckless pressur­ing of a person to commit suicide that overpowers that person’s will to live has been proscribed.”

Ms. Carter’s attorneys also argued that she did not “inflict serious bodily harm” on Mr. Roy, and the definition of “infliction” was argued at length in the oral arguments. The defendant argued that she herself had to be present and directly inflict the harm.

“If we were to interpret the statute to include such a requirement, it is difficult to see how a juvenile could be indicted as a youthful offender for, say, hiring a third party to carry out an attack on a victim,” wrote the court. “It is enough, as we said in Carter I, that ‘involuntary man­slaughter in these circumstances inherently involves the infliction of serious bodily harm.’”

The defense also claimed that her actions should have been evaluated under the “reasonable juvenile stan­dard” rather than “reason­able person” standard. The court found that the judge gave “sufficient considera­tion to her age and maturity.”

“Her ongoing contact with the victim in the days leading to his suicide, texting with him about suicide methods and his plans and demanding that he carry out his plan rather than continue to delay, as well as the lengthy cell phone conversa­tions on the night itself, showed that her actions were not spon­taneous or impulsive,” wrote the court.

The defense also con­tended that the lower court erred when it refused to allow testimony by an expert witness, a psychologist who was going to testify about the development of the juvenile brain.

The SJC decided that the judge was within his rights to bar that testimony and it showed no prejudice to the defendant.

In conclusion, the SJC wrote: “The evidence against the defendant proved that, by her wanton or reckless conduct, she caused the victim’s death by suicide. Her conviction of involuntary man­slaughter as a youthful offender is not legally or constitutionally infirm. The judgment is therefore affirmed.”

According to the Bristol County District Attorney’s Office, the next step is for the DA to file a motion for the stay of sentence to be revoked and the jail sentence to be imposed. The DA’s office will file that “within the coming days,” said DA spokes­person Gregg Miliote.

In a statement, Bristol County DA Thomas M. Quinn III said the case was a “tragedy for all of the people impacted.”

“However, as the court found in two separate decisions, her conduct was wanton and reckless, and caused the death of Conrad Roy. This was clearly established during the trial through the voluminous text messages sent between several parties in this case,” reads the statement. “As the court stated, the defendant herself admitted that she caused the death of Conrad Roy by her own conduct. The court found there was ‘no doubt in this case that the defendant wantonly or recklessly instructed the victim to kill himself, and that her instructions caused his death.’”

The statement noted that the court also addressed the contention that the conviction punished words alone.

“The court further found that, ‘The only verbal conduct punished as involuntary manslaughter has been the wanton or reckless pressuring of a vulnerable person to commit suicide by overpowering that person’s will to live and results in that person’s death……We are therefore not punish­ing words alone, (as the defendant claims), but reckless or wanton words causing death,’” wrote Mr. Quinn, quoting the decision. “This type of conduct has long been a crime in Massachusetts.”