At its meeting on Monday 6/7 the Acushnet Select Board discussed up­com­ing roadwork, as well as goals and objectives for FY22.

In another matter the Select Board reopened their discussion from the previous meeting regarding vacation carryover time for the DPW.

Mr. Desroches said he was still against allowing employees to carry over vacation days because it is in the union  contract not to allow it.

Board member David Wojnar said he was still for allowing union workers to carry over the days due to COVID this past year. He explained that 2020 was a “screwy year” and that all rules should be put to the side. He said he wants to be flexible for employees and make sure they enjoy working for the town.

Board member Kevin Gaspar was absent from the last meeting when the issue was first discussed, so the other board members held the item.

Mr. Gaspar said he understood that it is not in the DPW contract to allow carrying over days, but last year they had to let some employees do it. He said he agreed that they need to make sure people use their vacation days, but for this year they should allow the employees to carry over the days.

Mr. Gaspar explained that it is the last three weeks of the year and Department of Public Works  Superin­tendent Dan Menard needs his employees for the current projects they are working on. Mr. Gaspar said he was okay with carrying over the vacation this year, but not next year.

The board voted 2-1 to allow DPW workers to carry over vacation days with Mr. Desroces voting against.

In another matter the board dis­cussed goals and objectives for the fiscal year 2022. Town Administrator Julie Hebert explained to the board that it is important for them to look at where the town is and where they want the town to go.

She said everyone has such great ideas, and she would like each Select Board member to send her five goals or projects that they would like to work on for FY22. She will compile all the ideas and put it on the agenda to discuss for the next meeting.

Mr. Wojnar said he loved the idea of it being a virtual whiteboard of their ideas. He said they all have a vision for the town and he was very excited to get momentum behind some of their ideas.

In another matter the board discussed the plan for the old Russell Memorial Library building. Mr. Desroches explained that the building has been empty for six years. They originally wanted to make it housing for veterans, but that plan fell apart due to the cost, around $3.5 million back in 2018.

Mr. Desroches asked what the board thinks they should do with the property. He suggested possibly getting the building appraised and then put it up for sale. He said someone might buy it as office space, doctor’s office, or even a home.

Mr. Gaspar agreed that they should look into selling the library. Mr. Gaspar explained that the real estate market is hot right now. He suggested getting it appraised now.

Mr. Desroches said he believed that the decision to sell the building must be taken to town meeting.

The board also discussed road work with Mr. Menard, who said he made a list of the worst roads in town based on the complaints from residents. The streets on his list to be fixed are Mattapoisett Road, Oliveira Avenue, Wildrose Lane, Cushman Street, and Thomas Street.

Mr. Wojnar asked about Monmouth Street. Mr. Menard said he did not put it on the list because of the sewer project that could possibly be happening on that street.

Mr. Gaspar said there is no rush to approve roadwork on all the streets because not all of them will get done before winter.

The board voted unani­mously to do roadwork on Mattapoisett Road and Wild­rose Lane.

The board also announced that there are vacan­cies on multiple committees, in­clud­ing Agricultural Commission, Beautification Com­mit­tee, Board of Appeals, Cul­tural Council, Finance Commit­tee, and Historical Commission. 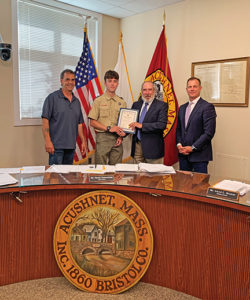 The board pre­sented a citation to Brian Michael Poirier, Jr., a member of the Boy Scout Troop 333 in East Freetown, Mass. and the Narragan­sett Council in East Providence, RI, who earned Eagle Scout rank in December.

Brian earned 35 merit badges and has served his troop in a variety of leadership roles.

His Eagle Scout community service project was the replacement and restoration of the “Welcome to Acushnet sign on Slocum Street.

Brian organized a crew to remove brush and clean the surrounding area of the bridge where the sign was to be attached. He also replaced the missing sign with a new restored welcome sign and pole.

Support local journalism, donate to the Neighb News with