On Tuesday, April 13, 2021, at approximately 5:30 p.m., Officer Quinn Indio was monitoring Slocum Street for motor vehicle traffic violations. His attention was drawn to a white Nissan Sentra traveling westbound on Slocum Street in excess of the 25 MPH speed limit. As a result, Officer Indio initiated a stop of the violator. 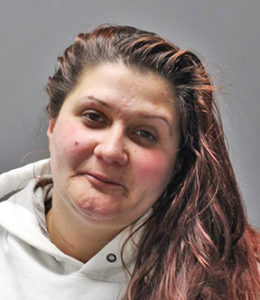 Robin Lyn Laroche has been charged by Acushnet police with trafficking heroin in excess of 100 grams, conspiracy to violate drug laws, and possession of a class A drug, subsequent offiense. Acushnet Police Department photo.

The vehicle operator was identified as 35-year-old Robin Lyn Laroche of 638 2nd Street, Fall River. It was determined that Ms. Laroche had a suspended driver’s license and two active arrest warrants. While she was being placed under arrest, it was also discovered she had a knife attached to a lanyard around her neck.

The passenger in the vehicle, 39-year-old Jose L. Cruz of 71 Robeson Street #2, Fall River, also had a suspended driver’s license. As officers made arrange­ments to tow the vehicle, he was advised he could make his own arrangements for a ride from the scene. When Mr. Cruz stepped from the vehicle to make a telephone call, he was asked by an officer if he had any weapons in his possession. He admitted to having a knife. It was located it in his front right pants pocket. The knife had an automatic spring release with a double-edged blade. Mr. Cruz was then placed under arrest for posses­sion of a dangerous weapon (MGL 269 sec 10).

A subsequent inventory search of the vehicle revealed in excess of 100 grams of suspected heroin, approxi­mately $1,235 in cash along with paraphernalia consistent with drug distribution. All were seized as evidence. 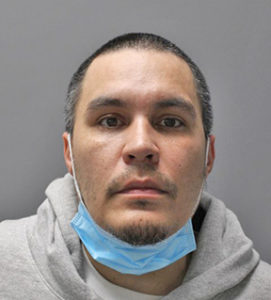 Jose Cruze has been charged by Acushnet police with possession of a dangerous weapon, trafficking heroin in excess of 100 grams, conspiracy to violate drug laws, and possession of a class A drug, subsequent offiense. Acushnet Police Department photo.

Officer Indio was assisted at the scene by Officers Kevin Martins and Michael Lajoie and Sergeant Michael Matton. The suspects were booked at the Acushnet Police Station before being transported to the Bristol County Sheriff’s Office Ash Street regional holding facility pending arraignment in New Bedford District Court on Wednesday, April 14.

In addition to the charges mentioned above, both Ms. Laroche and Mr. Cruz are being charged with: