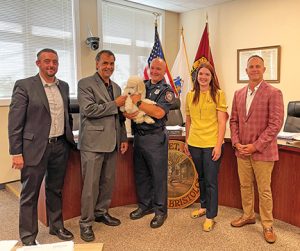 The Acushnet Selectboard welcomed a four-legged member of the police department at its meeting on 7/13/22 (that makes three if you inlcude the humans, see page 18). The yet-to-be-named comfort dog was donated by Melissa “MJ” Viera of MJ’s Pet Training Academy.

The 11-week-old Standard Poodle will begin her training as a Comfort and Community Resource Dog and will share her beat with School Resource Officer (SRO) Derek Cathcart.

Off. Cathcart told the board that over the past few years comfort dogs with SROs have “exploded around the country.”

So he went to a few trainings, got some information on how to go about it, and sent out a few emails.

“Melissa called me back couple of hours later and she offered the dog, the training, grooming, soup to nuts to the town for nothing,” he said.

Ms. Viera told the boadr that she breeds Standard Poodles and they are known to be an intelligent breed. The said they are bred to have sound temperament and sound structure.

“So we fully expect this puppy will excel at this type of work,” said Ms. Viera, adding that she and Off. Cathcart have a plan in place to train the dog.

Ms. Viera said they will continue to evaluate the dog’s temperament to make sure she is suited for the work.

The dog is already living with Off. Cathcart.

The department is looking for a suitable name for the pooch. Suggest a name on the Acushnet Police Depart­ment Facebook page or email SRO Cathcart at dcathcart@ acushnet.ma.us

Police Chief Christopher Rich­mond said the department will set up social media pages for the K9.

In another matter, the board voted unanimously to accept the Inter-municipal Agreement with the City of New Bedford for improvements  to the Lake Street complex.

SB Chairperson David Wojnar said that during the back and forth with the city, the town discovered that the city owns, or at least has rights to, more than just the water.

Town Administrator James Kelley said in a follow-up interview that neither party felt it was necessary to go back the 200 years or so to find out exactly what the boundaries are. He said it is clear that the city has the right to at least access the water, which it owns, through the property.

The town wants to make improve­ments to the property to make it a better recreational area. They also want to clean up the water from excessive growth of various plants.

Mr. Kelley said that the main points of the agreement are that the town has the right to use the property for recreational purposes. The town can also make improvements. Anything that would require a permit, though, will require a sign-off from the city.

The agreement has been bandied about for at least a couple of years.

Mr. Kelley said he found the right people in New Bedford to help move it along.

“I’m a little excited about it,” said Mr. Wojnar, adding that the town wants to make the complex more “resident friendly.”

SB member Bob Hinckley expressed some concerns about the length of the agreement, saying 25 years seemed too long to him, and that the  agreement still does not give the town rights to clean up the water.

The board also discussed the street opening moratorium they instituted at the previous meeting. It prohibits any entity from digging up streets anywhere in town without an exception granted by the Selectboard.

Mr. Wojnar said the moratorium  created some pushback from utility companies. Both Eversource and Comcast asked for meetings with the town.

Kathleen Silva from the Depart­ment of Public Works said they were not able to give out permits for water and sewer lines because of the moratorium.

Mr. Kelley noted that the board can make exceptions for emergency work, such as leaks and sinkholes; new utility connections; and mandated utility work.

The board voted to let the DPW issue permits for those three reasons.

The board also voted to accept the guidelines for the Senior Work Off Program, which would allow low income senior citizens in Acushnet to work for town departments to work off some of their property tax bills.

The measure was approved and funded at town meeting.

Council on Aging Director Heather Chew also updated the board on progress for installing two automatic doors at the senior center. She said the quote came in at $7,500.

The board also ratified the new Fire Chief’s contract. Chief Thomas Farland will receive an annual salary of $87,500, with four weeks vacation.

In other business the board

• Appointed committee members for all appointed boards in town;