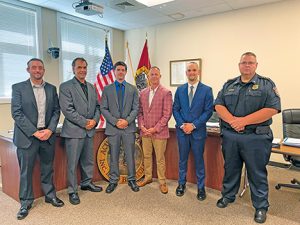 At its meeting on 7/13, the Acushnet Selectboard welcomed two new full time police officers to the department. Police Chief Christopher Richmond told the board that the hires replace two officers who became state troopers.

He said Matthew Melo and Timothy DaSilva were the top two on the civil service list.

Mr. Melo is a long time Acushnet resident with an Associate’s Degree in Criminal Justice.

Mr. Melo told the board he grew up in Acushnet, then moved to New Bedford for a couple of years, but has moved back to Acushnet. He is building a house in town.

Mr. Melo has already completed the full time police academy and has worked as a full time police officer in another department, so he will be able to start immediately after testing, said Chief Richmond.

“His training program will be very accellerated,” said Chief Richmond, and Officer Melo will be trained on protocol and items specific to Acushnet.

Mr. DaSilva is a long time Acush­net resident with a Bachelor’s Degree in Criminal Justice. He is currently employed as an armed security guard.

He will need to complete the full time police academy and pass the usual battery of tests before he can hit the street.

Mr. DaSilva told the board that his career is “somewhat related to law enforcement.”

He said he truly enjoys being in town, has lived in Acushnet since he was born. He told the board that his Eagle Scout project was at the Perry Hill Church, and he worked on the walkway to the Acushnet Grange in high school.

He said it would be “truly an honor to serve the town as a police officer.”

Later in the meeting Chief Richmond informed the board that a police officer is scheduled to be deployed with the National Guard. He will be the third officer deployed at the same time. Chief Richmond said the department has tried to find “some avenue” to seek relief and keep him from deploying, since he will be the third officer deployed by the small department.

“It’s really going to hurt us,” said Chief Richmond, adding that the officer will be deployed for one year.

The department faces a lot of overtime costs to cover the absences.

He said the department had budgeted for two to attend the police academy, so there is a savings there since Mr. Mello will not have to go.

“We’ve got to get ahead of it,” said the Chief, adding that the lack of a part time police officer program statewide is “coming to bear right now.”