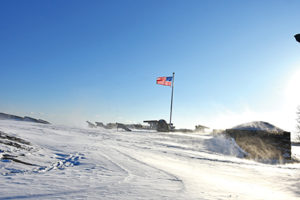 The flag is stiff in the wind as high winds whip the snow around at Fort Phoenix after a snowstorm dropped just a few inches on Fairhaven, followed by frigid temperatures in the single digits on Monday, 2/14/22. Photo by Beth David.

The region saw another snowstorm this week, with snow starting to fall after midnight on Saturday and continuing all day Sunday, with brief periods of reprieve. The light snow took a long time to accumulate, ending with just 3-4 inches. Snow continued all night Sunday to early morning on Monday, when frigid temperatures took hold. The single digits, combined with wind chills brought some places below zero on Monday, 2/14/22. Roads were treacherous, but plows were able to clear it a lot easier than the blizzard snow, which reached 18 inches in some places. 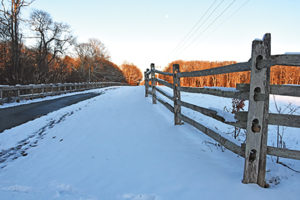 The Bike Path at Shaw Road shows some pavement after a a small snowstorm dropped just a few inches on Fairhaven, followed by frigid temperatures in the single digits on Monday, 2/14/22. Photo by Beth David.

The forecast shows several warm days that should completely melt the snow, with temps getting into the 40s this week. Those warm temps will also bring some heavy rain and wind, maybe even thunderstorms. The weekend should be sunny and warm at about 40 degrees. Visit westislandweather.com for weather info. 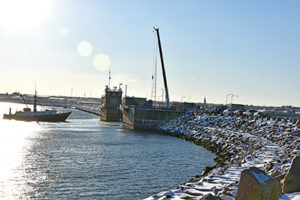 The Fishing Vessel Raeleen Michelle passes by the snowcapped rocks of the Hurricane Barrier as it passes through the gates to Fairhaven-New Bedford Harbor on Monday, 2/14/22, after a snowstorm dropped 3-4 inches on the region and temperatures dropped into the single digits. Photo by Beth David.