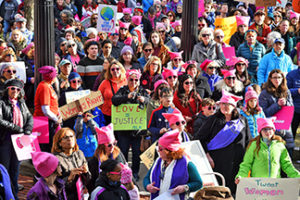 Hundreds gather in front of the New Bedford Public Library on Pleasant Street on Saturday, 1/20/18, for the Women’s March New Bedford 2018. Photo by Glenn C. Silva.

One year after the Women’s March on Washington gathered hundreds of thousands in Washington, DC, and millions more around the world to march for women’s rights, women’s rights activists and their supporters did it again. Millions gathered for marches in every state in the US.

In New Bedford, an estimated 500 people marched from Custom House Square to the Public Library for a short program of speeches, music, solidarity, and a call to action.

“I am so proud to be a citizen of New Bedford today,” said Ann Partridge, who is a world renowned expert in breast cancer in young women, and is married to New Bedford Mayor Jon Mitchell.

She urged the crowd to make sure this was not just a “moment.” 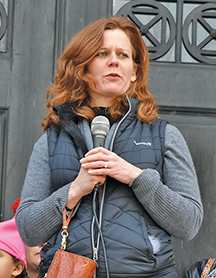 Ann Partridge, a world renowned expert in breast cancer in young women, and wife of New Bedford Mayor John Mitchell, addresses the crowd in front of the Library at the New Bedford Women’s March on Saturday, 1/20/18. Photo by Beth David.

“We cannot let ourselves and our community unsee this,” she said, as she looked out at hundreds of people, many holding signs in front of the Library on Pleasant Street.

“Thank you for being here,” she said, including the “awoken grand­mothers,” she noted from a sign she saw in the crowd.

“And also thanks to the men who are out here, because we have to do this together,” said Ms. Partridge.

She said New Bedford, the state of Massachusetts, and the United States are a great place to live “because we strive to improve, because we believe that every individual’s rights are important.”

She said it is uncomfortable for both men and women.

“And I think the most important thing is we acknowledge that, feel the discomfort and move through it,” she said. “And I beg of you all, let’s not just make it the moment and then go back to our day-to-day lives.”

Ms. Partridge urged everyone to “keep the pedal to the metal.”

“We need to keep pushing forward,” she said. “See you next year.”

A highlight of the day was the speech by Perman Hardy, who gained national acclaim for her efforts to register voters in Lowndes County, Alabama. For 25 years, she has passionately tried to make sure every single eligible person in her commu­nity is registered to vote and gets to the polls.

City Councilor Dana Rebeiro introduced her, saying no one had ever heard of Ms. Hardy until she was interviewed on National Public Radio. Ms. Rebeiro pointed out that New Bedford was Ms. Hardy’s first speaking engagement.

She got on the national radar after Doug Jones, a Democrat, won the senate seat in Alabama’s special election. 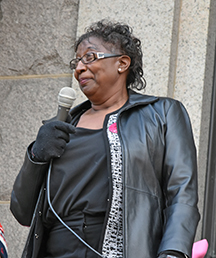 Perman Hardy, who gained national acclaim for her efforts to register voters in Alabama, tells the crowd to vote, so their voices will be heard. Photo by Beth David.

Ms. Hardy said her community of Lowndes County has about 300 people in it. When anyone turns 18, she finds him or her, and gets that person registered to vote.

That’s what she does, she said, very simply, she gets people to vote. If you are not registered to vote, she has everything you need in her car to get it done.

“Everybody knows, when election time comes, here I go,” she said.

And she started doing it long before she ever heard the name “Doug Jones.”

She recounted a time when her son told her he did not know what she had done, but that he saw a friend of his who said if he did not get to the polls, “Your mamma gonna get me.”

“And it’s all for one purpose. Exercise that right to vote because if you don’t speak that voice, you can’t say anything,” Ms. Hardy told the crowd. “Let your voice be heard”

She also said it was her first speech, and her first time on a plane. She is in demand as a speaker and will be traveling more to speak. She said she was no keynote speaker, though.
“ I just do me,” she said.

It doesn’t stop here, she said. It is not about her or Doug Jones.

“I never looked about Doug Jones. I don’t even know Doug Jones, “she said. “It was bigger than Doug Jones.”

She asked the crowd to pray for her safe return to her “grandboys,” adding it was the longest she had been away from them. 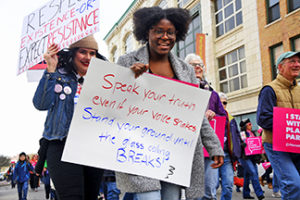 Marchers make their way up Union Street on Saturday, 1/20/18, during the Women’s March New Bedford. Photo by Glenn C. Silva

US Senator Elizabeth Warren and US Senator Edward Markey were not present because of the vote on the government shutdown, but both sent remarks that were relayed to the crowd, as did Rep. Bill Keating.

In her remarks Sen. Warren encouraged people to run for office.

“Democracy is not something we hear about every four years,” she said. “We need you now more than ever.”

In a statement read by Manny DeBrito, Sen. Markey wrote that we in Massachusetts know this is a “forever fight,” because we are the revolutionaries.

Massachusetts is where the revolu­tion began, where the Abolitionist movement started and where the Freedom Riders left to bring civil rights to the south, he said.

He said reproductive rights for women must be protected, and the wage gap must be closed.
“Your voices have been echoed in cities and towns across America and are leaving an indelible mark on our nation’s history,” he wrote. “Your movement, our movement, is who we are and I will never stop fighting for what Massachusetts has always been: A beacon for democracy.”
Beth Fauteux, who ran for New Bedford City Councilor last year, but not get in, said, “We always have to explain why we march,” and joked that maybe they can’t understand abstract thought.

She said the current administration is “just a symptom” of a bigger problem, and that is why they march, not to protest Trump.

She said they need a national movement for individual women to say “me, too.”

“We deserve a seat at the table,” she said, when legislation directly affects women’s rights and health.

Because the right to vote and work is not enough to say we are equal. 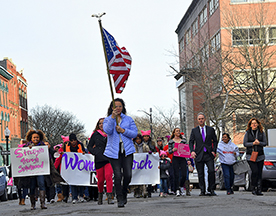 Marchers make their way up Union Street on Saturday, 1/20/18, during the Women’s March New Bedford. Photo by Glenn C. Silva

Marcelina Depina-Christian, relayed a story about her sister Millie, an Episcopalian minister who served in New Bedford. Ms. Depina-Christian said she did not know that her sister had sheltered Elizabeth Cobbs, a woman who testified in the trial of the Birmingham Church Bombing in 1963. Ms. Cobbs testified against her uncle and hid out in Mille’s dorm room during the trial.

Millie never told anyone about it. Ms. Depina-Christian said no one in the family knew until the book was published and a copy arrived in the mail.

“There were a lot of things she never told,” said Ms. Depina-Christian. “She could’ve been killed by the Ku Klux Klan.”

She said her sister lived her purpose in life as a clergy member.

“So, there were people before us,” said Ms. Depina-Christian. “We will march on to victory as one.”

Joan Berglund said she attended the march to be with like-minded people who want to move the country forward.

She said the US should be a “good place for everybody.”

Luvie Jean of Lynn, Mass. is a student at UMassD. She said it was important for her to be there to empower and uplift women.

“Because we’re part of a community. It’s important to talk about women’s rights issues,” she said. It starts with us, to be the change we want to see in our community.”

Joe Yarmac and Heather Church were there with their children.

Mr. Yarmac said he was there to show his support for all women, “And to show my children there is a better way than the current state of affairs.”

In a reference to a right-wing insult towards cultural sensitivity, one of the organizers told the crowd that they were, indeed, snowflakes: Alone they were very fragile, but together they could be a blizzard.

Before the march, organizers held a women-only “Women’s Forum and Persisterhood Luncheon” that caused some controversy when they would not allow male reporters in the room to cover it. Reportedly, a Standard-Times reporter and a WBSM reporter were asked to leave by New Bedford City Councilor Dana Rebeiro, an organizer of the forum and the march.
Taylor Cormier of WBSM posted a long complaint saying the women should not have been allowed to discriminate against him in a public building, and as a member of the press. He also said that WBSM does not have any females to send, that none have ever applied for the jobs during his tenure. Mr. Cormier is the News Director and anchor at WBSM.

Ms. Rebeiro said in a phone interview that WBSM does, indeed, have female interns they could have sent. She does a couple of segments a week with on-air hosts and suggested that the station send one of the interns.

“I said why not send an intern, and give one of them an opportunity,” said Ms. Rebeiro, adding that the station had several weeks to figure something out.

“It’s difficult,” she said. “But, we as women need to have time and space to have difficult conversations.”

She said one segment of the forum was #MeToo, when women were encouraged to share their personal stories.

“Women feel more comfortable if only women are in the room,” she said. “It’s not about leaving men out, When women are in charge, we take care of everybody.”

Discussion at the forum focused on the challenges women face in the work place and in their daily lives, and how institutional sexism keeps women down. 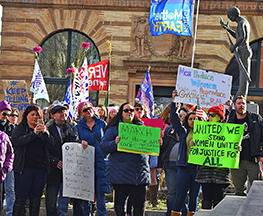 People hold a collection of banners and signs facing speakers in front of the library during the Women’s March New Bedford 2018 on Saturday, 1/20/18. Photos by Glenn C. Silva.

Several women spoke, and encouraged the very age-diverse group of women to get involved, and especially to vote.

Ms. Hardy gave her plug and encouraged everyone to vote and to get everyone they knew to vote, too.

“One person, one vote can make a difference,” she said.

Women spoke about body image, too, and how society shames women into unhealthy choices.

One woman said she remembered her grandmother, who was on a diet “My whole life.”

She said he grandmother was the softest woman she every knew, but when she told her that, her grandmother’s response was that she needed to lose weight.

“It’s about mental health, too,” she said, noting that depriving oneself of a sweet treat can backfire. “It’s about liking our bodies for what they’re worth, not what they look like.”

When Marlene Pollock of the Coalition for Social Justice began speaking and someone said she could not hear her, Ms. Pollock said she was surprised.

“I was always told I had a big mouth,” said Ms. Pollock.

“We all were,” said a voice from the crowd, prompting a lot of knowing laughter from the all-woman audience.

Jordan Thornlow from Planned Parenthood of Massachusetts spoke about the importance reproductive freedom for women. She said poor women cannot afford birth control or abortion, and PPLM has an advocacy fund to help.

“We are not equal until we are all equal,” she said. 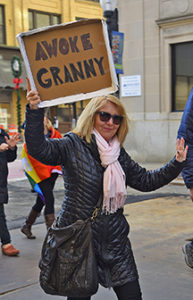 A marcher makes her way up Union Street on Saturday, 1/20/18, during the Women’s March New Bedford. Photo by Glenn C. Silva