Linda Kellish has lived by the Nasketucket River for nearly 30 years. She knows the river the way only a person who sees it every single day can know it. So, imagine her surprise when she saw a rare phenomenon last month, something she had never seen before, out her window. 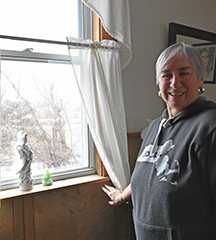 Linda Kellish of Fairhaven stands by the window she was looking out when she saw “ice pancakes” in the river. Photo by Beth David.

“I thought they were paper plates,” said Ms. Kellish, adding that she thought some “slobs” were throwing them into the water.

So, she went outside to clean them up. When she got there, she saw something she had never seen before:  a bunch of round disks that clearly were not paper plates.

She deduced that they were probably a result of the naturally occurring river foam freezing up.

Turns out, she was right.

Called “ice pancakes,” the winter phenomenon is rare outside of antarctica. But it has been noticed more often in recent years in other places, including around the Great Lakes in the US, according to several online sources, including the Weather Channel (www.weather.com), news sources in Europe, and the National Snow and Ice Data Center. 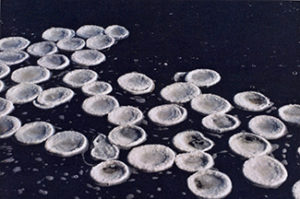 Ice pancakes forming along the Nasketucket River in Fairhaven last month are a rare sight in these parts. The phenomenon is created when ice and foam freeze up in pretty specific conditions that include moving water, an eddy, and freezing air temperatures. Photo courtesy of Linda Kellish.

The disks form when ice forms in moving water, especially where the water collects in an eddy, such as a turn in a river. The ice, which includes freezing foam, gets knocked around and breaks up. As the pieces bang into each other in an eddy, they become round and the edges push up, crea­ting rims in a rather distinctive look. 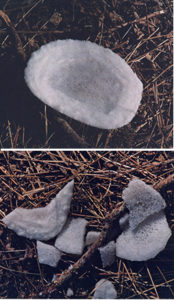 A close-up of a single ice pancake, created by freezing foam and water in the river’s eddying action, and the ice pancake broken up. Photos courtesy of Linda Kellish.

Sometimes, if it is cold enough, the ice pancakes will bind together and form a sheet of ice. In rough water, they can break up and cause all kinds of interesting looking ice patches, ridges, sheets and disks.

After grabbing her camera and taking a few pictures, Ms. Kellish said curiosity got the better of her. She could not just look at them. She pulled one out of the water, took a close-up shot of it, then broke it up just to see what it felt like.

It was kind of slushy she said, and cold and more fragile than she thought it would be. Just instinct told her that it was caused by the foam.

Since first spotting of them a few weeks ago, Ms. Kellish said she has been keeping a keen eye out to see them again. But, she said, it has not been cold enough.

“Now, I’m looking all the time,” she said

To learn more about how ice pancakes are formed, visit the National Snow and Ice Data Center at  https://nsidc.org/cryosphere/seaice/ characteristics/formation.html

To see photos of ice pancakes from around the world visit https:// weather.com/science/weather-explainers/news/pancake-ice-science-behind 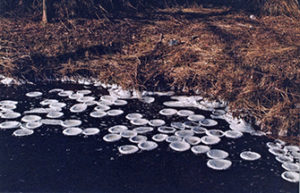 Ice pancakes forming along the Nasketucket River in Fairhaven last month are a rare sight in these parts. The phenomenon is created when ice and foam freeze up in pretty specific conditions that include moving water, an eddy, and freezing air temperatures. Photo courtesy of Linda Kellish.