By Pattie Pacella, Special to the Neighb News

You or your child may know Grace through school. She has a smile a mile long and is always smiling.

Recently, while riding in a float with me in the July 4th parade, many of the spectators watching the parade saw her and I could hear them say: “I know her, she’s in my school!”

It warmed my heart to hear!

Grace signs with friends and loves to be around children her age as much as she can. At first, other children are usually curious about Grace. She walks with a cool neon walker and talks through an iPad. She understands everything one is saying to her and enjoys playing ball. She has made a few friends at the East Fairhaven after-school program that she attends two afternoons per week. We think that her presence has been a growing opportunity for her as well as for the other children. When she wasn’t at the aftercare program, children were asking about her and missing her.

As a mom of a child with a disability, I try to allow Grace to engage with her peers, however, it feels as though sometimes it’s not done without an uphill hike. For example, Grace started at East for pre-school and a few more years (becoming familiar with her peers there), and then due to lack of room, she with SMEC had to go to another district (new faces and not her Fairhaven peers). 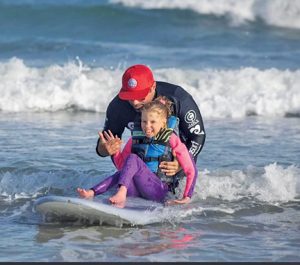 In the past year, she has attended afterschool programs at East Fairhaven Elementary School, both with the district as well as those run by the organization “Champions”. Grace has loved going and has been fully included. This year Champions also has a summer program at Wood School that I wanted Grace to be a part of. This is where our story starts.

Our plan seemed solid. Grace was going to attend with her Personal Care Attendant (PCA) who would help facilitate between Grace and the other children, as well as with the camp staff, in addition to taking care of any personal needs she may have.

In May of this year, I reached out to the director of “Champions” and asked for a meeting so we could see what “camp would look like” for Grace and to answer any questions they may have. I got no answer.

In early June, Grace and I attended an open house and met the site director. Again, I expressed my need for meeting with her and the director to learn more about what camp would look like for Grace. Again, no comment.

A week after the open house, I received an email from the director asking for Grace’s doctor to fill out an “Individual Health Care Plan” (IHCP). It was a very confusing one-page document that related to a child’s “medical condition,” and if something were to occur at the camp, what the protocol was. Grace’s doctor and I tried to fill it out the best we could, but it was a very confusing document as Grace doesn’t have a “medical condition. (Medical diagnosis, yes! But I wasn’t openly ready to share that, nor did I think I should have to). And you guessed it, they wanted her doctor to “label’ what her disability is. (hmm??)

Besides a major HIPPA violation, in my eyes, why would putting Grace’s medical diagnosis on a “health care plan form” be necessary? Here started my major confusion, sadness, frustration, and anger. Why is it that they need to know a child’s disability to attend a camp, especially given that her PCA would be attending with her? Trust me, my emails back and forth with this staff were very specific as I didn’t feel as a parent of a child with a disability the diagnosis needed to be shared with them.

Then the kicker — even though Grace was going to attend camp with her Personal Care Attendant I was told by the Champions camp director in two separate emails that her “staff was unqualified to handle Grace’s specific needs.”

After speaking to another “site director’ from another town who promised she’d get back to me within a few days but agreed that perhaps the form shouldn’t have been issued to us, there has been no further correspondence to correct this (other than the local camp director advising me how to “cancel my account,” so I wouldn’t be charged.)

The outcome is that Grace did not attend camp, and at this point will not be attending. The local site director came back from vacation and after reading the pages and pages of emails that had gone back and forth in two days, had three sentences for me (oh sorry I never responded to you wanting to meet in May and sure let’s talk about what “camp looks like for Grace”.)

Why up to this point would I ever want to send my child to a camp that says they are an inclusive camp but doesn’t demonstrate a true under­standing of what that word means?

As a mom of a child with a disability, I wish I didn’t always have to fight to ensure Grace has the same opportunities as other kids. Lack of education, lack of understanding, lack of communication… I am not sure, what was the issue?

Had my email and direct contact to have a meeting about camp two months before camp started been met, there wouldn’t be last-minute scrambling to gather information and ultimately Grace not attending. This is not a camp that is inclusive to ALL children. This is not staff looking to learn and/or educate themselves about ALL children.

I’m sad. I’m angry, still. I’m frustrated and I’m not done talking about this experience. All we wanted was for Grace to go to camp alongside her peers and have fun. Is that too much to ask??

The Pacellas live in Fairhaven.