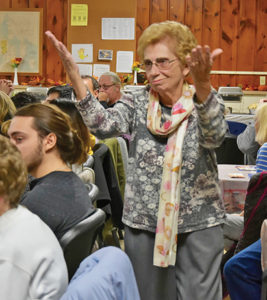 Terry Pereira struts down the aisle with her usual flair to receive her “Wall of Fame” award at the West Island Improvement Association’s Feast of Thanks on 11/9/19. Photo by Beth David.

The West Island Improvement Association began a new tradition, starting a “Wall of Fame,” that will honor people who have made large contributions to the island and the association.

The first recipients received their statues and accolades at the annual Feast of Thanks on 11/9/19, a members event held every November.

Terry Pereira, Herb Hunter, and Shirley Hunter each received the honor for their individual contribu­tions to the WIIA.

Ms. Pereira received the award for her work restoring the watch tower; her role in the “Save West Island” endeavor, which resulted in 363 acres of woods on the island being pres­erved as a state park; representing WI at meetings in the town over the years; serving on the WIIA board of directors and the scholarship committee.

Herb Hunter received his award for his work leading the construction of the playground; managing hall rentals; maintaining the building and grounds; leading the Sunday breakfast; prepar­ing turkeys for the Feast of Thanks; serving on the WIIA board; hosting the annual pig roast.

His wife Shirley Hunter received her award for leading the Chinese Auction; coordinating a safe boating course; leading the Sunday breakfast, serving on the WIIA board; hosting the annual pig roast.

The night highlighted a few of the projects and efforts that each con­tributed to, but is in no way a comprehensive list of the contribu­tions they each have given over their decades of involvement. 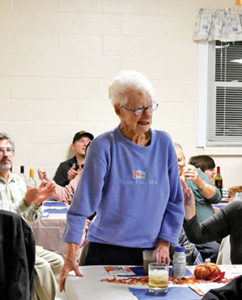 Shirley Hunter stands up to receive a little island love at the West Island Improvement Association’s Feast of Thanks on 11/9/19, when Shirley received one of the first three “Wall of Fame” awards recognizing her contributions to the WIIA. Photo by Beth David.

Scot Pomfret, who spearheaded the effort to start the recognition program, and serves on the com­mittee, emceed the night. His daughter Aubrey, how­ever may have stolen the show by help­ing to emcee, and leading everybody in the Pledge of Allegiance.

He thanked the founders of the WIIA who built the communitiy center, giving everyone a place to gather.

He had a long list of contributions for all three awardees, way beyond the accomplishments listed here.

Mr. Hunter said a few words, choking back tears, noting that the Feast of Thanks would not be happening if previous board members had not made it happen “way back.”

He deflected some of the praise for building the playground, saying he did not build it, other people did the work.

He said he could not have done any of it without the support and help of his wife Shirley.

“We are a wonderful organization,” said Mr. Hunter. “God bless us.”

Shirley did not speak for herself, but got an enthusiastic round of applause and, later on, a few hugs. Ms. Hunter is suffering from cancer, so it was a great effort for her to be there that night. A fact not lost on her neighbors. 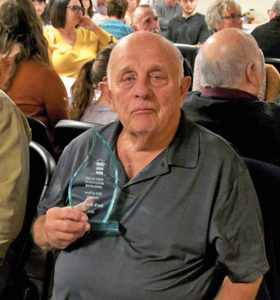 Herb Hunter poses with the “Wall of Fame Award” he received for his contributions to the West Island Improvement Association, at the WIIA’s annual Feast of Thanks on 11/9/19. Photo by Beth David.

She told the crowd that Terry and her late husband Manny devoted and dedicated “more of their lives and energy to make this island, West Island, what it is today, as beautiful and enjoyable as any island can be.”

She noted that Terry has often been called the “Mayor of West Island.”

“Get involved was Terry’s mantra and she attempted to lead the way,” read Mr. Pomfret.

Ms. Pereira said grace, and the feast began, signalling the end of organized activities for the WIIA for the season.