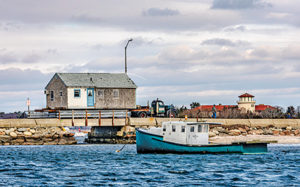 A house that used to live at 905 Sconticut Road in Fairhaven is carefully pulled across the causeway on 12/8/20 onto West Island where it will live on the corner of Fir Street and Misty Bay instead of getting demolished. Photo by Margie Green Joseph.

Bob Davis remembers the house on Wilbur Point as a fun summer place where everyone got together when his grandmother lived there during the summer. Built in 1952 by his parents with his grandparents’ money, the little house at 905 Sconticut Neck Road floated about 100 feet off its designated spot in the hurricane of 1954. They moved it back.

He and his wife are planning to live full time at the address, and the little cottage was just not suitable for that.

So, they weighed their options, including addition and demolition. But their contractor also came up with a third plan: Pick it up and move it to a lot on West Island, where another person needed a house.

“Most of the family is happy that grandma’s house will still be there,” said Mr. Davis, even though “there” is a different place. He noted, though, you can see West Island from Wilbur Point.

In any case, it’s better than tearing down the little two-bedroom, 20’x28’ house, that must indeed hold a lot of memories in its walls.

He grew up spending summers and “a whole lot of weekends” on Wilbur Point, although during some years as an adult and living far away, he did not see the little peninsula as often as he would have liked.

That’s not a problem anymore.

They’re full time now, well, when their new house is built. Mr. Davis said he hopes to be in by late spring.

His builder, Scott Snow, took custody of the house and hired Ralph Reed movers to pick it up and carry it to the corner of Fir Street and Misty Bay Road.

Tuesday, 12/8/20, was the big day. A parade of trucks, police, electric, and emer­gency vehicles slowly escorted the house along Sconticut Neck Road, to Goulart Memorial Drive, over the causeway to Fir Street, to Misty Bay.

A few minor glitches slowed things down here and there, but nothing major, and the house was delivered safely to its new home.

For those worried about the causeway, it can handle 40 tons and the house, with truck and steel and trailer weighed in at 35 tons. The causeway handled the weight just fine, but at the little turn, the load was just a tad too wide.

No problem, they rode it up on the sidewalk for a bit, using hydraulic jacks to level out the house, and then gently rode it down at the curb cut.

The turn onto Fir Street was also a little tricky, but they got it done.

The route along Fir, though, had to be cleared by Fairhaven Tree Warden  G. Bourne Knowles. He said he did not want to cut clear-cut the trees ahead of time. He wanted to be sure to cut only as much as was necessary.

Fire Engine 3 was also on the island in case there was a fire while the house blocked the road.

So, it was a bit of excitement for the neighbors, who got a call via the town’s emergency network the night before. Many took up a spot at Hoppy’s Landing or along the 2.5+ route, to witness the rare event, which took all day. Top speed: 10 miles per hour. 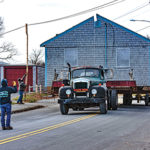 On 12/8/20, Ralph Reed directs the driver of the Mack truck pulling the house that used to live at 905 Sconticut Road in Fairhaven while a worker pushes up the electrical lines for it to fit under on its way to West Island where it will live on the corner of Fir Street and Misty Bay Road instead of getting demolished. Photo by Glenn C. Silva. 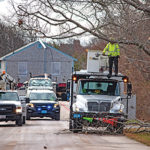 Fairhaven Tree Warden G. Bourne Knowles stands on top of his truck to clear branches along Sconticut Neck Road to make room for a house getting pulled to its new home on the corner of Fir Street and Misty Bay Road on West island. Photo by Glenn C. Silva. 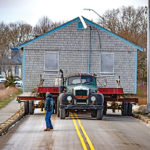 A house that used to live at 905 Sconticut Road in Fairhaven is carefully pulled along in a tight fit on Goulart Memorial Drive on 12/8/20, on its approach to the causeway and West Island where it will live on the corner of Fir Street and Misty Bay instead of getting demolished. Photo by Glenn C. Silva. 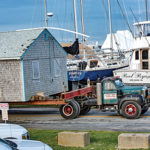 A house that used to live at 905 Sconticut Road in Fairhaven slowly moves past the boats at West Island Marina on 12/8/20 on its way its new home on the corner of Fir Street and Misty Bay Road on West island. Photo by Glenn C. Silva.