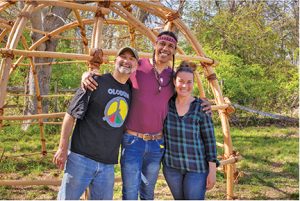 On a beautiful stretch of road along the edge of Apponagansett Bay sits a stacked stone foundation with no house on top. These would be the remnants of the Russell Garrison House, which served as a defensive outpost for the first lonely colonists that came to occupy what is now Dartmouth. There on a sign for the public interest, the words read: “On this site inside the home outlined by its remaining foundation, local citizens sheltered in 1675 as they sought safety from attacking Native Americans”. As so often occurs, the Native American perspective is erased — but we are a part of the story too. Just as we are still a part of the story today, and have always been a part of the story.

These “Native Americans” were Wampanoag; they were my people. As a Wampanoag, the words on the sign seem remarkably backward, as hundreds of Wampanoag citizens rose up to drive out 30 interloping English colonizers who were seeking to expand English territory beyond the agreed limits. After 50 years as neighbors, the colonial need to expand found the edge of Wampa­noag’s willingness to trade territory for strength. After the Passing of Oosameequan, the Massasoit who signed the 1621 agreement with Gov. Carver, all the major Wampanoag leadership pushed back against further land transfers to the English.

These beautiful, calm, sheltered bays, and the rich fertile tributary river valleys that spread from Dartmouth to Middleborough to Taunton, were the heart of the post-1614 pandemic Wampanoag territory. Much of the beauty of the land is still evi­dent today. It is no surprise that the possession of these territories would spark wars. Along the coast­lines here you can still find the quintessential “New England” —what we call Wopanaak or “The Dawnland”. Looking out the window as one drives through the South-Coast area of Massachu­setts, one still sees the old historic salt boxes, the weathered clapboards with peeling colonial paint flakes, one boat growing vines next to a garage, and another freshly painted on the bay. But what remnants of Native life do we see?

As Wampanoag people, we are still very much a part of the South-Coast region. Some of the first areas to limit “Native Occupation” would create restricted Wampanoag districts in Fairhaven, New Bedford, and Dart­mouth. The region is home to smaller communities as well, such as Assonet and Pocassett, with Native lineage families adopting names such as Helms, Blake, and Mitchel.

For Peter Craw­ley, the many Wam­panoag place names that are still embedded in the South-Coast landscape were a part of his inspiration to find a project that might bring visibility to the Wampanoag people who still live in the region. Crawley works as an en­vironmental sustainability consultant and recently was part of negotiating a significant land return in Kingston, MA from a private donor to the Native Land Conservancy. In the process, Crawley met and partnered with Wampanoag Annawon Weeden, and together they created the Wampa­noag Experience to share the deep traditional knowledge and value system of Wampanoag culture.

For us as Wampanoag people, the well-being and sustainability of our environment is foundational. But 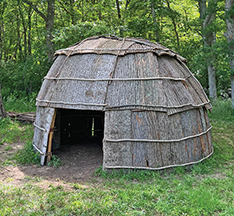 The weetyu at Round the Bend Farm was constructed as part of the Wampanoag Experience project. Photo by P. Crawley.

just as we as a people have become invisible, so too has this value system in a world driven by profit and consumerism.

I was quite pleased when I heard that Crawley had partnered with my friend and associate Annawon Weeden, Mashpee Wampanoag tribal member and lifelong cultural artist/educator, for the purpose of building a bark-covered home (weetyu) and hosting a celebratory powwow. Weeden, a former New Bedford resident, has spent a lifetime dancing, singing and as MC for local powwows. He has also presented at colleges, museums, and K-12 classrooms across New England for over 20 years. He has worked for tribal education departments of all the major tribes from Massachusetts to Connecticut.

The Crawley-Weeden partnership was completed when they teamed with Desa VanLaarhoven, Executive Director of the Round the Bend Farm, and they all agreed to build the weetyu and host a powwow at the farm. Round the Bend Farm is a working farm and educational non-profit dedicated to the farm’s mission to: value diversity, model nature, and redefine wealth — all values that align with Wampanoag life-ways.

The central meeting place looks over fields of crops that have been farmed since a time when cattail-covered weetyus stood on the land instead of colonial salt boxes. I can already imagine the space during the powwow, full of craft vendors, the smells of blue fish hash (or maybe some smoked muscles), and hearing the drum echo off the trees, the voices singing in harmony and the dancers’ feathers moving to the beat.

Wampanoags still love this land, its woods, its rivers, its bays. We love to fish in her waters and to walk in her woods, through the swamps. We still honor the bounty of the land, turkey and deer, medicine plants and wild blueberries. We still appreciate the harvest of the gardens. This apprecia­tion is a part of what moved me as I first toured Round The Bend Farm with VanLaarhoven. VanLaarhoven made me feel welcome and has a vision of inclusion versus exclusion — with inclusion applying to ALL of us — all walks of life, all persuasions, all creeds and colors.

You can stand on the farm’s ancient rock outcroppings worn by the glaciers that stood towering into the air when my ancestors first arrived here, and you can look out over the fields of crops that give way to wild plants and then stretch out into wetland marsh and the open calm water. It seems looking out on a sight like this that time moves as slow as the water here and I can sense the presence of my ancestors. 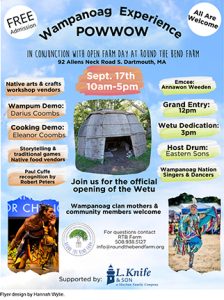 For local Native people in particular, I recommend going to the powwow to see the new weetyu and to find out about the ongoing cultural and educational programming that will grow from the Wampanoag Experience project. For the general public, a powwow is when we put out the welcome mat as Wampanoag people and show our best: our best food, music, and dance, and a time to honor and celebrate success or help mourn loss. At times photography will be restricted so listen to the announcements. Many of the dances are for particular groups of dancers, but there are even times the public can join in during social dances or inter-tribals. Any veterans may join the Veterans’ dance as an example. And of course, the storytelling, food and crafts are for everyone.