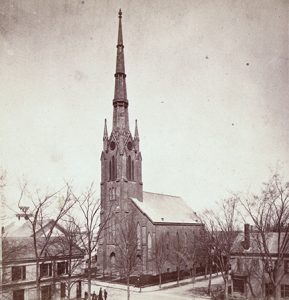 The First Congregational Church is on the walking tour of the center of Fairhaven, Mass. Photo, circa 1861, courtesy of the Fairhaven Office of Tourism.

The historical Fairhaven center is the scene of a walking tour presented by the town’s Office of Tourism on Saturday, September 24, at 1:00 p.m. The tour, guided by Christopher Richard, will begin in Leonard E. Pierce Memorial Park at the corner of Fort and South streets.

The tour highlights interesting bits of history and relates stories of past personalities such as Capt. Alexander Winsor, Henry H. Rogers, Warren Delano II and others.

You’ll learn about houses that have moved from place to place and which church is only half as tall as it used to be. You’ll find out what was in the center before Henry H. Rogers built his buildings there. If you don’t know which house was filmed for a 1921 classic silent movie starring Clara Bow or if you’d like to know who “the richest man in town” was when Henry H. Rogers was just a newborn, you will want to walk along on this tour. 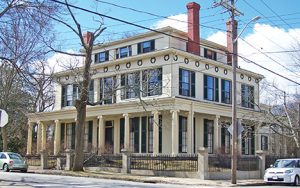 Ezekiel Sawin mansion, William and Washington streets is on the walking tour in the center of Fairhaven on 9/24/22. Photo courtesy of the Fairhaven Office of Tourism.

This tour is different from the tours that are regularly scheduled during the summer weeks. The walk will last about 90 minutes. It is free of charge. In the event of rain it will be canceled.

To get to Leonard E. Pierce Memorial Park from Route 6, turn south on Main Street at Fairhaven High School. Take the sixth left, South Street, just after passing Margaret’s Restaurant. The small park is on the left.

For more information, call 508-979-4085 or email FairhavenTours@fairhaven-ma.com. The Fairhaven Office of Tourism is open Monday, Tuesday, Thursday, Friday and Saturday from 8:00 a.m. to 4:30 p.m.