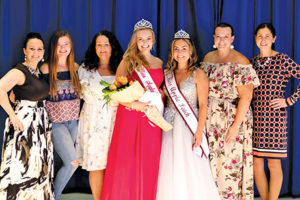 Victoria Kalisz (in red) is crowned Miss Apple Peach 2019 at the pageant on 9/6/19, at Ford Middle School, taking over for Natasha Moniz, the 2018 titelholder. The pageant celebrated its 40th year and invited former Miss Apple Peach winners to join the fun. Photo courtesy of K. Garcia Productions.

On Friday night, 9/6/19, in front a crowd of more than 120 people at Ford Middle School, Victoria (Tori) Kalisz was crowned Miss Apple Peach 2019. Tori is a senior at Fairhaven High School and is the daughter of Michael and Marlene Kalisz of Acushnet. Tori previously held the title of Junior Miss Apple Peach in 2015. 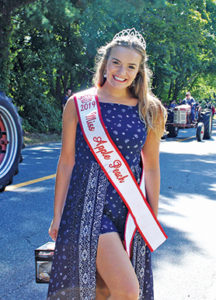 Newly crowned Miss Apple Peach 2019, Victoria (Tori) Kalisz, makes it to the fairgrounds of the Apple-Peach Festival after participating in the parade on 9/8/19. Photo courtesy of the Miss Apple Peach Pageant via Facebook.

The pageant celebrated 40 years by welcoming back former queens to the stage, including Tori’s mother, Marlene (Nunes) Kalisz, who was Miss Apple Peach in 1985. Pageant officials believe this is the first time a mother-daughter combo was crowned and the first time a Junior came back to become a Miss. 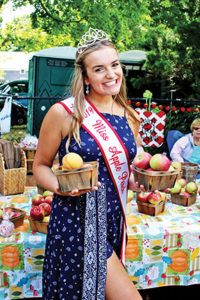 “Hi everyone! My name is Tori Kalisz and I’m your new Miss Apple Peach 2019!” wrote Ms. Kalisz on the Miss Apple Peach Pagent Facebook page. “I am so excited for the year ahead, and I am thrilled and honored to represent my hometown of Acushnet! I enjoyed being part of today’s parade, spending time at the festival meeting so many wonderful people and adorable children (my favorite part).”

Businesses interested in spon­soring the pageant, anyone interested in competing in 2020, or to request an appearance by Tori, please email pageant02743@gmail.com.

Did you know that the peagent is on Instagram? Follow us @acushnetmissapplepeach to follow Tori’s year as our 40th titleholder and to receive program updates! #missapplepeach #tk #acushnet #hometown