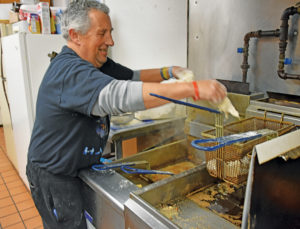 Steve Correa has a smile on his face as he drops seafood into the oil on 2/28/21 at the Fairhaven VFW Kitchen, which he now manages. Photo by Beth David.

The Fairhaven VFW Kitchen has reopened under new management. Steve Correa, who has cooked at local establishments for more than 40 years, has taken over. Mr. Correa is known for his seafood specials and steak dinners.

His cooking career includes stints in a variety of venues, most notably bar/restaurant estab­lish­ments in Greater New Bedford.

He says you’ll get all the specialties, quality, and variety you expect from him if you know his cooking. If you don’t, then get over to the VFW, 101 Middle Street, Fairhaven to sample it. 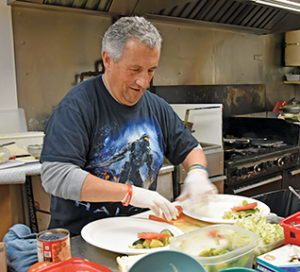 Steve Correa’s hands are a blur as he quickly sets up a couple of dinner plates on 2/28/21 at the Fairhaven VFW Kitchen, which he now manages. Photo by Beth David.