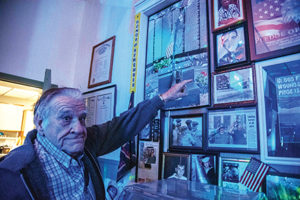 Raymond England, Marines 1953-1956, points to a picture of himself on the wall at the Fairhaven VFW during the free buffet and night of dancing on 10/18/19, organized to show appreciation for veterans, especially those from Desert Storm to the present. Photo by Glenn C. Silva.

The Fairhaven VFW held a free buffet and night of dancing for veterans, especially those who served from Desert Storm to the present, on Friday, 10/18/19. Organizer George Brownell, a Vietnam Veteran, said all veterans were welcome, but that he wanted to single out the veterans from the more recent wars because he feels they are often forgotten.

He said other wars ended with a lot of fanfare and celebrations to welcome home the veterans. But the war on terrorism is an ongoing threat, and military personnel are being deployed over and over.

Often, he said, they come home and no one seems to notice beyond their immediate families.

The VFW welcomes all veterans, said Mr. Brownell, but he wants to make sure no one feels forgotten, and all feel appreciated.

“All gave some, some gave all,” he said. 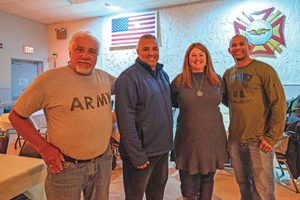