Fairhaven’s Veterans’ Services Office has been located in the Council on Aging/Senior Center building since June 23. Last week, the VSO/COA jointly held a barbecue lunch to welcome the VSO to the building.

By all accounts, the move has been a good one, with both departments saying the move is working out well.

In all seriousness, though, COA Director Martha Reed said the move just makes sense, because the crossover in services needed by both sets of clientele is substantial.

“It’s been really great to have them here,” said Ms. Reed, adding that the VSO can easily refer veterans to the many services that the COA can connect them to. And when the COA finds out one of their patrons is a veteran, they just have to “travel to the hallway.”

She said six veterans have already been referred to food insecutiry programs since the move.

The senior center is also much easier to get into than the town hall. 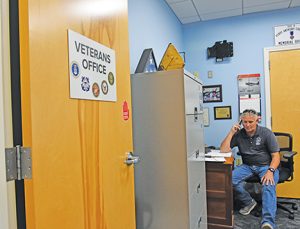 Fairhaven Veterans Services Officer Brad Fish answers a call in his new office in the Council on Aging/Senior Center building after a welcome barbecue lunch on 8/10/22. Photo by Beth David.

Mr. Fish said he often had to meet veterans outside of town hall because they simply could not navigate the street parking or the difficulty in getting into the building.

The senior center has its own parking lot and is fully wheelchair accessible.

And, another bonus is the Recrea­tion Center connected by a hallway.

Several patrons also said it was a good idea.

Ralph Paquette said he went to the senior center because he is a veteran. He likes the affordable lunches, which are a $2 voluntary donation.

“I like it a lot better, beause there’s not always parking at town hall,” said Mr. Paquette. “This is very accessible. And I can go to Stop & Shop, and can use my bicycle.”

Veterans Kenny Nelson, his sister Mary Ann Nelson, and Pat Jardin, all said they were there because of the veterans office.

“We really like it said,” VSO Administrative Secretary Jane Bettencourt, although she got a bit misty-eyed when she talked about leaving town hall and missing people there, a place she worked at fror 32 years.

She said it will be so much easier or veterans, especially in the winter. 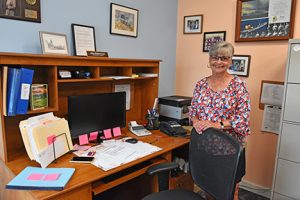 Jane Bettencourt, Administrative Secretary for the Fairhaven Veterans Services Office, gives a big smile for the local free sheet in her new office in the Council on Aging/Senior Center building after a welcome barbecue lunch on 8/10/22. Photo by Beth David.

“Not more falling in the snow,” she said. “And easy access.”

“It’s the best thing we’ve ever done,” said Mr. Fish, adding that he wanted to move years ago, but the building just did not have room for them with all the programs they were running.

Then COVID hit, and a lot of progrms shut down or moved.

Mr. Fish said most veterans offices have moved to the COA.

“It makes sense,” he said. “We have the same clienele.”

He said the veterans no longer have to shuttle from town hall to the COA to access services.

Not everyone was a veteran, though.

Sue, who did not want to use her last name, said she goes to all the differetn senior centers. She was in Fairhaven that day for the free BBQ.

“I come often. I come to socialize,” she said. “You can’t just sit and do nothing, you’d die. You nave to have a reason to get up.

Ms. Reed said the COA is hoping to get the Social Day program up and running soon, a program that was halted due to the pandemic. They need at least 20 people to sign up before they can restart the program. To learn more about it, call the senior center at 508-979-4029.

The center, 229 Huttleston Avenue in Fairhaven, is next to the Stop & Shop plaza. To learn more about the senior center and its programs, stop by Monday–Friday, 7:30–3:30, find them on Facebook, visit the website at https://www.fairhaven-ma.gov/council-aging, or call 508-979-4029.