Both Fairhaven and New Bedford will hold parades this Saturday, 11/11, in honor of Veterans Day. Acushnet will hold a ceremony on Saturday, and Fairhaven will hold flag raising and lowering ceremonies at Fort Phoenix.

In Fairhaven, the annual parade to honor all veterans is followed by a brief ceremony, including raising the “Big Flag” and cannon-firing in front of Fairhaven High School. Veterans and other marching groups are welcome to line up at Livesey Park at 8:30 a.m. Parade steps off at 9:00 a.m.

Veterans are asked to gather at Livesey Park behind Oxford School, 347 Main Street, Fairhaven, by 8:30 a.m. Parade steps off at 9 and marches along Main Street to Fairhaven High School for a short dedication and the raising of the big flag. Veterans who cannot march should go to the Senior/Recreation Center by 7:45 a.m., where transpor­ta­tion will be provided. Coffee and donuts for all veterans at the Senior Center until the vans leave for the parade. The Lions Club will provide free coffee and donuts at the North Fairhaven Improvement Association building in Benoit Square at 8 a.m.

At precisely 11:11, for one minute the bells of town buildings will ring as part of the Bells of Remembrance effort launched locally. Fairhaven and surrounding communities are participating in this effort. 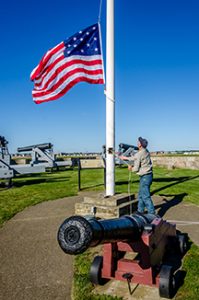 Join us for flag raising and lowering ceremonies on Veterans Day.

New Bedford will hold its parade on Saturday, 11/11, beginning at 11:00 a.m. The 2017 New Bedford parade is presented by the City of New Bedford Veterans Advisory Board Veterans Day Parade Committee.

Parade participants will gather at the intersection of Rockdale Avenue and Union Street (Buttonwood Park) at approximately 10:30 a.m. and the parade will step off at 11 a.m. sharp.
The parade route has changed this year due to ongoing roadwork in the City. The parade will march east on Union Street, then turn left onto County Street, and then turn right onto William Street to the reviewing stand located in front of the New Bedford Main Library on the corner of Pleasant Street and William Street.

A Veterans Day service will be held at the reviewing stand at the conclusion of the parade and all participants and parade attendees are encouraged to attend. Seating will be reserved for elderly and disabled veterans near the reviewing stand.
Desert Storm and Bosnia veteran Paul Souza will serve as the Grand Marshal of the 2017 parade.

Born the son of New Bedford native Dr. Joseph “Zac” Souza, Paul Souza enlisted in the United States Army in September 1983 as a 19 Echo, Armor Crewman. He attended Basic Training at Fort Knox Kentucky. After training he would be go to Germany to the 3rd Armored Division, both the 2nd BN 33rd Armor and 2nd Bn 32nd Armor of the where he would serve as a Tank Driver, Tank Loader, and then transition to become a 19Kilo M1 Abrams Tank Gunner.
He was then reassigned to Fort Hood Texas to the 1st Bn 32nd Armor of the 1st Cavalry Division and in 1990 would deploy to Operation Desert Shield/Desert Storm. Upon his return he would again be reassigned to Germany to become part of the 1st Armored Division where he would become a Tank Commander.

He was again reassigned to Fort Riley Kansas and the 1st Infantry Division, 1st Bn 34th Armor and continued served as Tank Commander. After a brief time as an Army Recruiter in Fullerton California he would return to Fort Riley and would deploy to Bosnia peacekeeping mission. He would remain at Fort Riley as a Platoon sergeant until his retirement in 2003.
He is currently an employee of the Bristol County Sheriff’s Office and the Executive Officer for the Abrams Company of the United States Brotherhood of Tankers, a non-profit organization dedicated to the preservation of America’s armor and cavalry heritage.