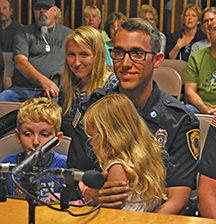 Fairhaven police officer William “Guy” Vachon, with his children, Emily and William, on his lap, greets the Selectboard on 6/17/18, while his wife Devin sits a row behind and smiles as the children are clearly restless with all that official talk. Photo by Beth David.

The Fairhaven Selectboard on Monday, 6/17, publicly welcomed William “Guy” Vachon into the ranks of the Fairhaven Police Department.

With his young daughter and son in his lap, and his wife sitting close by, Officer Vachon was introduced by the board and by Fairhaven Police Chief Michael Myers.

Chief Myers said they were “very excited to have him on board,” and and that he had “tremendous experience.”

In a separate interview, Office Vachon said he worked in security at MIT, grew up in Mattapoisett, and has lived in Fairhven for several years.

His wife Devin echoed the sentiment, adding that she was glad he was out of the academy, which is a grueling experience for family members as well as the cadet. 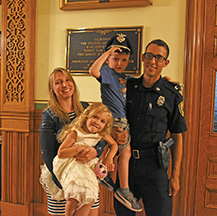 “I like being here [in Fairhaven],” she said, adding, however, that it is a “little bit bigger than Mattpoisett.”