In its third announcement of 2021, the Carnegie Hero Fund is proud to recognize 18 civilians who risked their lives for others. Each will receive the Carnegie Medal, North America’s highest honor for civilian heroism.

Among those to be awarded this quarter is John D. Colter, 66, who rushed into his daughter’s home after hearing gunshots and confronted her estranged husband, who had shot and wounded her. As he wrestled over control of the gun, Colter yelled for his daughter to go get help. Minutes later, the gunman shot and killed Colter, and fled.

Also awarded are five men who drowned attempting to save others.

The Carnegie Medal is given throughout the U.S. and Canada to those who enter extreme danger while saving or attempting to save the lives of others. With this announce­ment, a total of 10,256 Carnegie Medals have been awarded since the Pittsburgh-based Fund’s inception in 1904. Commission Chair Mark Laskow said each of the awardees or their survivors will also receive a financial grant. Throughout the more than 117 years since the Fund was established by industrialist-philanthropist Andrew Carnegie, more than $43 million has been given in one-time grants, scholarship aid, death benefits, and continuing assistance. 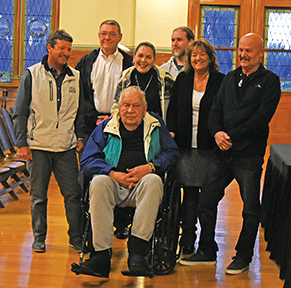 Colin “Jack” Jackson (seated), who was saved from a fire at his home above Jackson’s Variety in Fairhaven on 2/3/20, is surrounded by his rescuers at a ceremony in Fairhaven town hall to recognize the citizen-heroes who saved him. FRONT, L-R: Ronald Rock, Mr. Jackson’s daughter Tina Jackson, Roberta Raymond, Earnest “Butch” Beauparland; BACK ROW: Dr. David Fall, Anthony Cogswell. Photo by Beth David.

On the morning of Feb. 3, 2020, an 83-year-old man who used a wheelchair was trapped on the second story of a burning building after flames broke out on the third floor and the electricity turned off making his motorized chairlift inoperable.

Ernest “Butch” Beauparland, a 66-year-old retired laborer of New Bedford, Massachusetts, was driving nearby and saw flames. He stopped and ran up the stairway, along with a 58-year-old ferry boat captain of Fairhaven, Ronald Rock, who was also driving nearby and responded.

Beauparland and Rock grasped Jackson under the legs and, backing slowly down the stairs, carried him outside, as fire spread along the ceiling above them. Beauparland and Jackson inhaled smoke, but they recovered.

The organization does not reveal who nominates individuals for the medal, or the amount of money medal recipients receive.

The Neighb News covered the story of the fire in our 2/6/20 issue; and a subsequent story on the rescuers being recognized by town officials in our 3/12/20 issue.

In addition to Mr. Beauparland and Mr. Rock, several other individuals helped get Mr. Jackson to safety, including Roberta Raymond, Dr. David Fall, and Anthony Cogswell.