Jay Simmons, chairperson of the Fairhaven Conservation Commission and the Fairhaven Housing Authority, was treated at St. Luke’s Hospital for injuries he sustained to his head on June 9 at around 8 p.m. Mr. Simmons named his alleged attacker as his neighbor, Lee Miguel. The two have been in a dispute about a paper street that abuts their homes on North Street.

Mr. Simmons said that Mr. Miguel allegedly indicated he wanted to speak to Mr. Simmons, but “not much was said.”

Mr. Simmons alleges that Mr. Miguel, “decided to beat the side of my head.”

Fairhaven Police spokesperson Lt. Kevin Kobza would not confirm the name of the alleged attacker, but did say that “both parties were inter­viewed,” and that the appropriate paperwork was filed in court. No complaint, however, has been filed, so Lt. Kobza said he would not give out any details of the investigation. The matter will be reviewed by a court magistrate, who will decide if charges should be filed against any of the parties.

“It’s simple,” said Mr. Simmons. “I was behind my house Sunday evening, raking on North Street. I was approached by Lee Miguel and he did not like the fact that I was maintaining North Street and he assaulted me.”

Mr. Miguel denies the allegation, saying that he was not there at the time, that he was on vacation.

“I never had an altercation with him,” said Mr. Miguel when reached by phone. “That’s defamation of character. If you put that I’m gonna sue you and the town of Fairhaven.”

Mr. Miguel also suggested that the Neighb News call his attorney, but hung up the phone without giving an attorney’s name.

In the previous assault, Mr. Sim­mons was attacked in front of his house on March 3, 2015, by an unknown male wielding a shovel. Mr. Simmons has alleged that the earlier incident is also related to his dispute with Mr. Miguel, but no charges have ever been filed in that attack.

The dispute dates back to January of 2014, said Mr. Simmons, when he found Mr. Miguel cutting the grass on the marsh, which is prohibited without a permit. As a member of the ConCom, Mr. Simmons felt he had to speak out, he said.

Things escalated over the years, with accusations back and forth between the two. Mr Miguel has appeared before the ConCom for the work in his yard.

There is also a dispute about the end of North Street, a “paper street” that goes to the marsh. Mr. Simmons said he has maintained that length of road since he was a child, and continues to do so. Mr. Miguel, he said, has blocked the end of the road with debris to prevent people from using it to get to the marsh.

Mr. Miguel hung up abruptly, before the Neighb News could ask him about those allegations.

Lt. Kobza said that if the District Attorney decides to issue a complaint, more information will be available to the public. 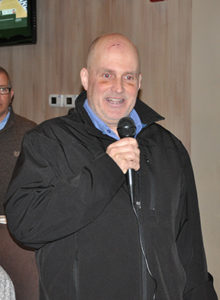 Jay Simmons speaks to supporters on 3/14/15 at a birthday party and fund-raiser for him after he was attacked with a shovel on 3/3/15. “I’m so, so, so, lucky,” Jay told the crowd. “I’m lucky that the shovel
broke.” Photo by Beth David.