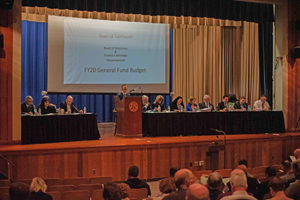 Fairhaven Town Meeting members zipped through the warrant of 50 articles between the annual and special TMs, ending at about 1 p.m. on Saturday, 5/4. Most budget items passed with little or no discussion, and bylaw changes also passed with almost no discussion. TM approved more than $50 million in spending for the operating budget, and $1.7 million in capital spending. 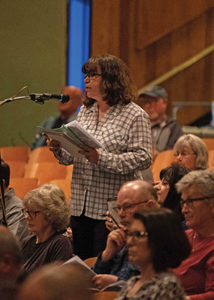 Some of the smaller items got some of the most discussion. Article 12 of the annual TM included a jump in the stipend for the Selectboard from $5572/year each to $7500/year. Several TM members spoke against the raise, noting that the Selectboard has gotten regular raises, and that this particular jump would be more than 34%.

Selectboard member Dan Freitas said that board members are required to pay for a lot of things out of pocket, such as flowers for funerals, fund-raising breakfasts, etc. He noted that another change is that future selectboard members would not be allowed to get health insurance through the town.

Mr. Freitas said he spends 20-30 hours a week on Selectboard business, so it comes to just over $5 an hour. He said it is more than a part time job.

“I’d appreciate it if you’d support it,” said Mr. Freitas.

The $7500 would put Fairhaven as the second highest in the state, said one TM member.

Ms. Szala said a lot of Selectboard members before them have worked just as hard. 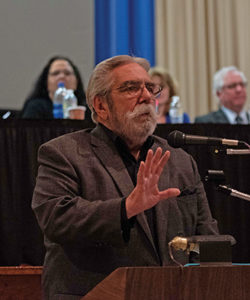 Bernard “Bernie” Roderick speaks against an article to pay for engineering/architectural services for the town to buy a piece of property for a new police/fire safety complex at the annual Town Meeting in Fairhaven on 5/4/19. Photo by Glenn C. Silva.

A similar discussion took place around a proposed raise in the stipend for the Board of Health members from $4308 (split three ways) to $5816. Ms. Szala made the same suggestion, to go up 20% instead of 35%, and the smaller number passed, $5170.

There was significant discussion around an article in the Special TM to spend $32,000 for engineering/ architectural services related to purchasing land for a public safety facility. During the discussion, the parcel was identified as the G. Bourne Knowles property on Huttleston Avenue/Route 6.

Bernard “Bernie” Roderick spoke against the article, making it clear more than once, that he was not against a public safety facility. He said he wanted TM to wait and consider the long impact. The town is facing tens of millions of dollars in repairs to the Wastewater Treatment Plant, and should wait before considering  $20 million for a public safety facility.

“I’m asking you to think seriously about this issue,” said Mr. Roderick.

Police Chief Michael Myers assured TM that the $32,000 was only for a preliminary study to see if that piece of property is feasible for the facility. He said the police and fire depart­ments waited, first for the high school project, then East Fairhaven School, then Wood School. Meanwhile, the aging fire and police station building is deteriorating.

He said the building was “seriously deficient,” and they have spent close to half a million dollars in recent years to fix it.

After some discussion back and forth, the article passed by a huge margin, with only a handful against it. 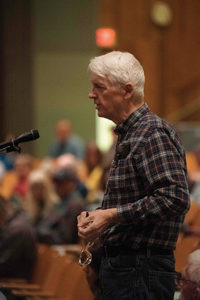 The installation of traffic cameras passed, after some discussion about privacy. Chief Myers said the cameras would be in high traffic areas and would not be monitored.  He said they would be available as an investigative tool after crimes had been committed.

Town Meeting also passed changes to the Town Administrator Act, albeit with lots of discussion and a bit of confusion on exactly what was being changed. The changes are necessary to clear up conflicts between the Special Act that created the Board of Public Works and the switch to the TA form of government. The changes spell out who has authority over BPW employees.

The article to add a bylaw to record all government meetings also passed, with an amend­ment to require that the meetings be available online, despite former Selectboard member Michael Silvia saying it could create an “unfunded mandate” in the future.

Rich Griffiths also pointed out that the article itself did not say it was a bylaw change, so it was amended to reflect that.

The meeting is available in its entirety at https://www.fairhaventv.com/townmeeting