After hearing arguments from both sides Town Meeting members approved the bylaw regulating recrea­tional retail marijuana in Fairhaven at the Special TM on Tuesday, 11/13/18.

TM members also rejected a bid to extend the moratorium on retail marijuana in town. 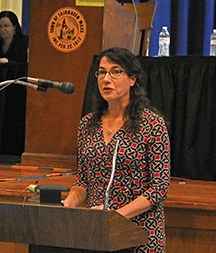 At her first TM as economic Develop­ment Director and Town Planner, Gloria McPherson presented the key points of the bylaw to TM members. She noted that the Planning Board discussed the bylaw at seven public meetings and held two public hearings.

Any retail establishments would require a special permit from the Planning Board, which will regulate the business for hours of operation, security, traffic flow, parking, etc.

Doug Brady, who has been a vocal opponent of recreational marijuana shops in town said the discussion was leaving out the many other uses, by his count 64 different licenses that could be handed out in town, for other use categories.

None of those uses are retail sales, said Ms. McPherson. She said there are about a dozen marijuana license types that the Cannabis Control Commission has approved, and there may more approved, however not at the pace that detractors are contending.

The idea, she said, that the CCC is creating “new and exciting” uses all the time is “not factual.”

She said they have been working with the same uses for the last two years. If there are new uses, such as social/on site consumption, then the bylaw will be modified and new public hearings will be held, she said.

She also noted that some retail operations will hold more than one license, so there will not be 12 different facilities in Fairhaven. In any case, there will only be a maximum of three retail outlets in Fairhaven.

Mr. Brady, Cathy Delano and John Pond, all outspoken opponents of retail shops in town, also pushed for the moratorium to be extended, saying that the regulations are confusing and the town needed more time to refine them.

“Our bylaws are five feet deep,” said Mr. Brady, but also noted that nothing is spelled out on what is not allowed.

“Ms. Delano said that there was no risk to a moratorium and noted that even with all our town regulations there could be highway signs directing people to pot shops in Fairhaven.

This was all before the moratorium even came up for discussion.

“If you’ll pardon the pun, I think we all need to lighten up a little bit,” said Rich Taber.

In the end, TM passed the bylaw easily by the 2/3 margin. 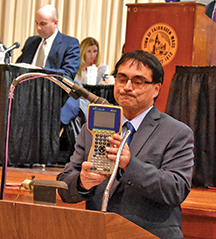 Public Works Superintendent Vinnie Furtado shows the kind of hand-held water-meter reader that he wants to replace at the Fairhaven Special Town Meeting on 11/13/18. “Well, these have been around since Moby Dick was a minnow.” he said. Photo by Beth David.

The group still tried to get the moratorium extension passed, even after Town Counsel Town Crotty said it was likely that the Attorney General’s office would not approve it. The point of the moratorium is to give towns time to craft a bylaw regulating recreational marijuana. Since Town Meeting had just passed a bylaw, the moratorium was no longer necessary.

The measure failed, with only a handful of votes supporting it.

In another matter that received a healthy amount of debate, TM approved an article giving the Selectboard the authority to sell the Rogers School site to New England Preservation and Development, LLC, and work out the details later.

An article to rezone the site to accommodate the proposed plan was passed over, with the Selectboard making the request to give the Planning Board time to craft the zoning article. Presuming the negotiations with NEPD go as planned, the zoning article will appear on the warrant of the annual Town Meeting in May.

Zachary Mayo, Director of NEPD, told TM that the project calls for 14 condo units in the old building, and four single family houses on the property. He said the house are designed to “match the aesthetic of the neighborhood.”

After getting assurances from the Selectboard that a performance bond would be required, TM voted to allow the sale of the property to Mr. Mayo’s company.

The public will get another chance to weigh in on the proposal when the Planning Board works on the bylaw to rezone the property to accommodate the project. The rezoning will have to be approved by TM, and will probably be on the warrant at the May annual meeting.

TM also approved the allocation of money already budgeted to fund the change in salaries as recommended by the wage and classification study for non-union positions. The new system creates grades and steps, and eliminates the automatic increases for non-union employees. Pay increases will be based on merit. Most positions saw an increase in pay scale, some just pennies per hour, others in the thousands per year.

The change was necessary, said town officials because the town was underpaying staff, and because of low salaries was having a hard time retaining good employees.

The new system will also ensure that the town is in compliance with the state’s Equal Pay Act, that requires the town to pay comparable rates for comparable positions.

The previous system, town officials said, was not equitable.

Robert “Hoppy” Hobson got some satisfaction when TM approve an article reimbursing him $1,000 for attorney fees he incurred due to a recount after a tie in the April election. Mr. Crotty admitted that he gave incorrect advice and explained that the town’s insurance company had a $10,000 deductible. Mr. Hobson spent $1,700 on attorneys fees but negotiated the $1,000 settlement with the Selectboard.

Cathy Melanson of Total Confec­tions, LLC/Emma Jean’s, however, did not get satisfaction, as TM rejected her request to release her liquor license from the address at 115 Huttleston Avenue. TM approved the license in 2012 with the restriction that it not be transferrable to another location. It may be transferred to another business.

TM member Wayne Oliveira said it seemed like it was a “back door way” of getting an additional liquor license. He said TM approved it in 2012 for a specific intent.

Selectboard member Bob Espindola echoed that sentiment saying the original license was to allow Emma Jean’s to sell gift baskets with “nips,” not a full liquor store. He said he was afraid of setting a precedent.

The vote was overwhelmingly against the change, with only handful of TM members voting “yes.”

The license at the location is a full liquor license, and Ms. Melanson could open a liquor store at that location, the way the license has been issued. It just cannot be moved.

In other business, TM passed an article transferring $50,000 from surplus revenue to fix the ceiling in the Assessors Office; funded $147,000 to repair or replace a sewer pipe at the Fire/Police Station; approved the transfer of $75,000 from the water enterprise fund for hand held meter readers; approved an additional $45,000 for the wheelchair access project at the Academy Building, bringing that project’s total to $164,000; voted to accept Doane Court and Reynolds Drive as public ways. •••

Well, these have been around since Moby Dick was a minnow [Vinnie Furtado about the hand held water-meter readers]

If you’ll pardon the pun, I think we all need to lighten up a little bit [Rich Taber about the marijuana bylaw]

Did you get that, Beth David [Mr. Sylvia to make sure it made it into the quotable quotes]

From one hot topic to another [Mr. Sylvia on going from marijuana to the sale of the Rogers School]

You can, you are the last person at the mike [allowing Terrance Meredith to call the question on the sale of the Rogers School building]

Mr. Crotty made the mistake, maybe he should pay the one thousand dollars, but that’s beside the point [Robert “Hoppy” Hobson]