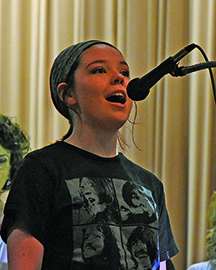 On one of just a few articles that received a bit of discussion, Fair­haven Town Meeting voted to keep the Town Clerk position an elected job. The rest of the 40 articles were decided and about $50 million spent, with TM members on their way home by 12:35 p.m. at the annual Town Meeting on Saturday, 5/5.

One of the longest debated articles was a $7,500 item for an exercise station on the bike path. First a tie, counting votes, then a reconsider, all amid much discussion.

Meanwhile, the operating budget, with its $48+ million price tag passed with barely a whisper.

The wage and classification changes were not instituted, instead, the Selectboard decided after the precinct meetings on Wednesday, to hold off on the controversial raises until the fall, when a special TM is planned.

Selectboard chairperson Daniel Freitas told town meeting members that the budget was a consensus budget for the third year in a row, meaning the departments, Finance Committee and Selectboard agreed on the numbers. However, the FinCom spoke against several items during the course of the meeting.

All items in Article 14, the capital spending plan, passed, with item G, the spending for the Rogers School, drawing a lengthy debate.

The item asked for $252,000 for repairs and maintenance to the Rogers School building. Several TM members spoke for and against the article. Those in favor cited the need to keep the building marketable while the town looks for a buyer, or a partner to repurpose the building.

The money will be used to stop leaks, repoint brickwork, and perform other repairs to keep the building in good shape for the next 10 years. It will also be used to get the building on the National Register of Historic Places, making it eligible for grants 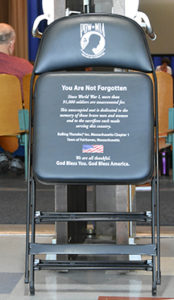 The traveling POW-MIA chair in the lobby at Fairhaven’s annual Town Meeting on Saturday, 5/5/18. The chair is to remind Americans that there are still 83,000 prisoners of war/missing in action service members around the world from the nation’s wars. A permanent chair is in town hall. Photo by Beth David.

Some members said it was a waste of money with no solid plans for the building. Others argued that the building would be no good for anything without the repairs.

Michael Ristuccia, a member of the Board of Public Works, spoke against the article, saying that he knew there was a contractor serious about develop­ing the building and the grounds. He said he knew that the contractor had submitted a “formal proposal.”

The discussion revolved around that proposal for a while, with some TM members asking why they were not told about it. Mr. Freitas noted that it was not finalized. Committee members could not talk about it until they knew what it was.

Some members said the town should not put money into the building for “nostalgia” without it having a particular use, while others said that is precisely the reason to spend the money.

Doug Brady, a Rogers School Com­mit­tee member and strong advocate for the expenditure, said spending the money now will extend the life of the building for 10 years.

He noted that Mr. Ristuccia neglected to tell town meeting that the proposal he was advocating for was from his grandson.

Mr. Brady said the proposal was not for “nostalgia,” but for the future, and once on the register, the town or a developer could apply for grants and tax credits. He said it would be a big mistake for the town to give up an historic building in the center of town.

“If it doesn’t happen, I think you have to do something with this building,” said Mr. Freitas. “No one in Fairhaven wants to see this school knocked down.”

“I don’t think it’s an outrageous amount to save this school,” said Lisa Plante, a FinCom member who spoke from the floor. “I think we should definitely do this.”

The FinCom had voted 4-4 on the item.

After a vote to remove the item from the article failed, the whole article, items A through P, passed by the required 2/3 vote.

Other capital planning items in­cluded $155,000 for fiber optic con­nectivity for town buildings; $283,000 for high school gym dehumidification project; six vehicles for various departments; $70,000 for the parking lot at Livesey Park; $200,000 for an HVAC system at the Recreation Center and Senior Center building.

The aforementioned $7,500 item from Community Preser­va­tion funds garnered a lengthy discussion. The proposal to put a fitness station along the bike path faced stiff resistance from people complaining, among other reasons, that the first fitness station near the Senior Center never materialized.

“Let’s see what the use is of that apparatus,” said Mr. Elliot, adding that the “if you build it they will come,” sentiment is not a sure thing.

Selectboard member Bob Espindola said that the way people exercise has changed. He said people will walk or bike on the bike path, use the fitness center, and then continue moving. 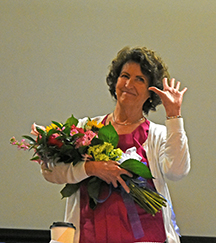 The item was proposed by the town’s Wellness Committee, repre­sented by Pattie Pacella, who told town meeting that the weather had delayed the installation of the first fitness station. She said it should be in soon.

Kathleen Carter, a FinCom member who spoke from the floor, said that the town needed to consider liability.

First TM voted on indefinite postponement of item J. That was a close vote, so moderator Mark Sylvia called on the counters to count those for and against. The vote was  88 for and 89 against IP.

Then Mr. Sylvia asked if the counters had counted themselves.

Mr. Sylvia suggested that the vote be reconsidered, but that required someone on the prevailing side to request it. Gary Souza obliged (for which he was expressly thanked at the end of the meeting). After a little more discussion, the vote to reconsider passed, and the vote to pay for a fitness center on the bike path passed, no count necessary.

Mr. Sylvia told members that it was time to talk about modern technology for Town Meeting instead of “counting people the old-fashioned way.”

Article 33, which proposed chang­ing the Town Clerk position from an elected position to appointed, did not pass, leaving that position elected, as it always has been.

The lengthy debate included the pros and cons of the change, including that it is the only full time position in town hall that is elected. The strongest reasons for making it appointed included being able to choose a qualified person, which would increase accountability, and that the position does not create policy, but is largely administrative.

Kyle Bueno, speaking for the majority of the committee that sought to make the change, said the commit­tee did a lot of research to reach their conclusion.

However, the minority opinion was also very vocal and handed out a flyer with all the reasons they believed the position should stay the same.

Most of those in favor of keeping the position elected said changing it to appointed would take power from the people. They said the position was accountable to the voters.

Bernie Roderick, a committee member in the minority, said a survey showed residents were very happy with the town clerk’s office.

He said changing it would disen­franchise voters, taking away the “most basic right.”

Those in favor of the change emphasized that although the town has had good Town Clerks in the past, there is no guarantee the next candidate will be qualified.

It is time for a change, said Ann Richard, a Committee member in the majority.

“It’s not broken,” said Mr. Freitas. “There’s nothing wrong with it.”

“In the short term, we’re in great shape,” said Mr. Espindola. “This is about the long term.”

In the end the measure failed.

At the end of the meeting, Mr. Sylvia gave Town Clerk Eileen Lowney a bouquet of roses, and sang her praises for her time as Town Clerk, to loud applause and a standing ovation. Ms. Lowney, who has held the position for more than 20 years, has announced she will not run for re-election when her term is up in 2020.

• Passed $476,500 in Community Preservation Act funds, including that much-discussed $7,500 for a bike path fitness station, $92,000 for sidewalks on Walnut Street around the library, $86,000 for library window restoration, $150,000 to the Stratford Capital Group for the Oxford School Residences.

• Voted to allow the Selectboard to set a speed limit of 20 MPH in areas of town that are not posted.

• Voted to assess a 3% tax on recrea­tional marijuana sales.