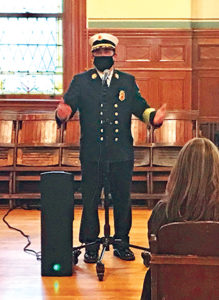 Fairhaven Fire Chief Todd Correia says a few words after being sworn in on Monday, 4/12/21 in the Town Hall auditorium. Photo courtesy of Fairhaven Fire Department/EMS by Kristine Austin.

Todd Correia made the transition from acting Fire Chief in Fairhaven to permanent chief during the Select­board meeting on 4/12/21, when he was officially sworn in upstairs in the Town Hall auditorium.

Surrounded by family, friends, lots of firefighters and police personnel, Chief Correia took his oath and thanked the many people who helped him along the way.

“I am deeply humbled and honored to see you all be here today,” said Chief Correia, and thanked Interim Town Administrator Wendy Graves and the Selectboard for the opportunity to serve as the next fire chief in Fairhaven.

He thanked his family, saying they aave been with him throughout his journey, noting it has been a “tough struggle” going through the ranks of civil service exams, to lieutenant, then deputy chief, and now chief.

“I’m honored and blessed to have you all as my family,” said Chief Correia. “So thank you for being here.”

He made special note of thanking former chief Timothy Francis for giving him the opportunities that led him to his position.

“So, Chief Francis, thank you for everything you’ve done for me throughout my career,” said Chief Correia. “To the men and women of the Fire Department: I am blessed. I am really honored to see you all here today, and I look forward to working with eacn and every one of you.” 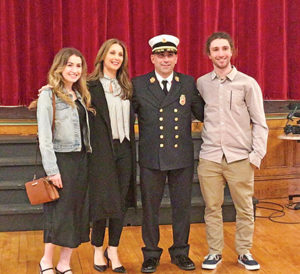 Fairhaven Fire Chief Todd Correia poses with his family after he is sworn in on Monday, 4/12/21 in the Town Hall auditorium. L-R: His daughter Cassidy, his wife Heather, Chief Correia, his son Chase. Photo courtesy of Fairhaven Fire Department/EMS by Kristine Austin.

He said they will take what Chief Francis has left us, “and build upon it and make it a stronger, more bene­ficial department.”

He also thanked police chief Michael Myers for also being a mentor, calling him the senior chief of public safety.

Chief Correia said the town was unique in the good relationship that the two depart­ments have, and that is why they want to continue to share a public safety facility. He said he would strive to maintain that relationship.

The citizens of Fairhaven he said, “I will strive to represent you and maintain the legacy that Chief Francis has left us,” of being a professional deparment.

Chief Correia also promised to spend taxpayer dollars wisely, and to train and be “better equipped for the emer­gencies of tomorrow.”