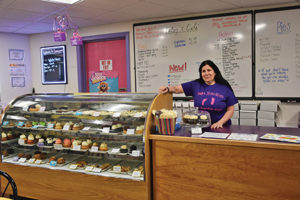 Cathy Melanson, owner-operator of Emma Jean’s Cupcake Factory and Ice Cream Shoppe in Fairhaven, stands behind the counter a few days before announcing that the business will close on 3/31/19, so she can concentrate on her health issues. Photo by Beth David.

Cathy Melanson has had a good run of it, lots of fun, and lots of memories, but now, she says, it’s time to pack up the spatula and move onto the next thing.

Well, maybe let’s not pack up that spatula quite yet.

Emma Jean’s Cupcake Factory and Ice Cream Shoppe, which opened in the fall of 2011, is closing as a bakery as of 3/31/19. A 50% off sale will start on 3/21, except for bakery items and meat pies, which will still be made daily and by order.

Ms. Melanson said her health issues, that she has been battling for the last three years, have finally slowed her down to the point that she just can’t keep up the pace anymore. Her fibromyalgia is no secret, she said, and now she has a few other things that will need medical attention very soon.

“I have to deal with my health issues,” said Ms. Melanson. “So it’s best if we just shut it down.”

She will miss the customers, she said, very much, and hopes they all come in to grab their meat pies in the next ten days before they close.

“I’ve got some loyal, good customers,” said Ms. Melanson. “And they crack me up. We’ve got some really good people.”

But something had to give, she said.

“At this point, I just have to take it easy,” she said, but the business still requires an enormous amount of energy and time from her.

She won’t be stopping completely, of course. She still has her cable access cooking show, “The Family Table,” which she plans to continue.

And…and….big news here, she will be writing a cook­book. And, yes, it will include all her best recipes, secrets and all. It seems like a good retirement job.

She might even run cooking work­shops from time to time to show people how to make all her cus­tomers’ favorites. Those include her German stollen bread, that in­cludes a secret.

Hmmm…maybe the cookbook won’t have ALL her recipes in it.

She said she will keep the phone number active so customers can call for special orders.

What she will not miss, she said, is dealing with the scheduling issues, personnel issues, and all the costs associated with running a business. She said times have changed. Her husband runs a fish processing business, and the two of them also ran EJ’s bar and grill next door.

Things have changed just enough to make it even tougher, she said, with taxes, insurance, and additional employee costs required by the state.

“The mom and pop stores are all going belly up,” she said.

They just can’t compete with the Market Baskets, the big box stores, and online ordering.

She said it does make her sad when she thinks about not seeing her customers on a daily basis anymore.

“They are the ones who make you walk through that door every day,” she said.

She’ll miss just “hanging out” and joking around with them. And she’ll miss the building, too, which she renovated completely.

“It’s so light and colorful in here,” she said. “And, of course, I named it after my granddaughter.”

Her granddaughter Emma Jean was stillborn in 2010.

“This is something that I truly enjoyed doing,” said Ms. Melanson.

Then her eyes light up again as she talks about the cookbook and the cooking show.

“I’ve got all these yummy recipes, she said: pies, blueberry pie ice cream, bourbon apple crisp, and on and on. “I don’t want my customers to be disappointed.”

So, she’ll just have to show us all how to make them ourselves.