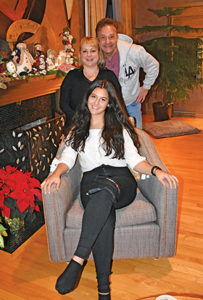 CBYX/AFS exchange student Stella Hommel (seated) with her host parents Barbara and David Cournoyer at the Cournoyer home in Fairhaven on 1/26/20. Photo by Beth David.

Stella Hommel has not only been all over the world, she’s lived all over the world, and speaks six languages to prove it. But, at the tender age of 16, she still had not been to the United States, and really wanted to see the land of the many movies and TV shows she had grown to love.

The AFS-USA (American Field Service) exchange program gave her that chance. But, the cost was prohibitive for her family, with mom and dad being teachers in Germany, the latest country they called home.

A scholarship chance, though, also presented itself. A long shot it was to be sure: Only one out of 200 applicants would make it from her “circle” in Hamburg, which is sort of like a congressional district. That program, run by CBYX (Congress-Bundestag Youth Exchange), would pay for all her expenses.

A junior at Fairhaven High School, Ms. Hommel, 16, said she immedi­ately decided it was a good way to afford a trip to the US. Plus, the CBYX scholarship looks good on a resume.

She has always been interested in the politics of countries and the history of the world. Which is good, because she had to write an essay in English, and take a test about politics and history. There were other criteria, too, of course, including good grades. But that was no problem, she is a straight-A student.

The 200 applicants were whittled down to 15. Then it came down to Stella and two boys. She had to meet with the representative of her district and convince him that she was the one to go.

But how did she end up in little Fairhaven from Hamburg, Germany?

“I did not want the south, because it’s too warm,” said Ms. Hommel, whose English is perfect, and spoken with very little accent.

So she narrowed it down to the New England states, and received profiles of host parents, with details on their homes, other children in the home, pets, etc.

Her host parents, Barbara and David Cournoyer, were also shown profiles of students, with their favorite activities and preferences for pets, etc.

Ms. Cournoyer said she has been involved in the AFS program for years. When not hosting a student, she is a liaison. This year, they were late entries, deciding towards the end to host a student. She said she just happened to run into someone affiliated with the program who said they had more students than host families.

Fairhaven High School has two AFS students this year, which is a maximum allotment for the school.

The area AFS students, though, number higher than that. They have get-togethers regularly, includ­ing a recent ski trip in New Hampshire.

When choosing her host family, Ms. Hommel said she Googled the house, and the pool in the back yard and the dog (a pitbull mix named “Alphie”) sold her on Fairhaven and the Cournoyers.

So, is it very different from Hamburg?

Hamburg is a big city of almost two million, Fairhaven is a small town of about 16,000. School days are a lot longer in Hamburg. Mostly, it’s the lack of public transportation that is the most difficult thing to adjust to.

She has made friends at school, though. Taylor Gall joined in the Neighb News interview. She sat behind Stella in class, they intro­duced themselves, and a friendship was born. They are also teammates on the cheerleading team.

But, if anything, Ms. Hommel is able to adjust. She rides a bicycle to get around, and famously rode it to Stop & Shop on Christmas Eve to get a spice for the traditional Hungarian roast duck she made for the Cournoyer Christmas guests. And, yes, she had her own Hungarian season­ing, vegeta, to make it authentic.

She feels she chose well, if her praise of the Cournoyers is any judge.

“I think it’s amazing that they opened their house to a person they don’t know, and here I am,” said Ms. Hommel.

She is part of the family, sharing family dinner, and doing activities together. They have gone to New York City a couple of times, and saw the 9/11 Memorial Museum. She saw Times Square, the Brooklyn Bridge, Manhattan, the Radio City Music Hall Rockettes, the Empire State Building, and … well, more.

At Christmas time they saw the big tree at Rockefeller Center, and the Macy’s windows, and Bryant Park.

“I saw where Gossip Girl was filmed,” said Ms. Hommel with clear excitement.

Oh, and she got to teach Ms. Cournoyer how to use the subway.

“So, we get to do things we never did before, too,” said Ms. Cournoyer.

As for Boston, she still needs to do more exploring. So far, they have only made it to Harvard Square.

They have also been to Newport RI, and the Cape. They joined a whale watch out of Provincetown and spotted many of the mammoth sea mammals, includ­ing a 60-ton male, and a mother with two babies. 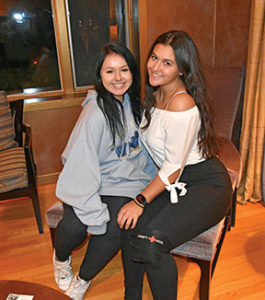 Ms. Hommel also got to visit Washington, DC, with the AFS group. They visited the memorials, the Supreme Court and Capitol Hill, and had meetings with the congressional delegation or their aides.

They also just happened to be there during the impeachment hearings. Ms. Hommel got a pass from our local representative’s office to get into the hearings. She actually heard about an hour-and-half of Ambassa­dor Gordon Sondland’s testimony in person.

The requirements of the scholar­ship also include 25 hours of commu­nity service, and attending three cultural events.

For one of her cultural events, Ms. Hommel visited an Native American man in Pascoag, RI, who taught her about drum circles and teepees and how Native Americans lived.

She also visited Salem, Mass., to learn about the witch trials. She said it was “hard to see” what happened there, but that she had known about it.

“Salem is really famous for witches all around the world,” said Ms. Hommel.

They also went to the opening night of the Plymouth Philharmonic Orchestra, which did double duty for Ms. Hommel. It counted as a cultural event, but she also served hors d’oeuvres at the reception, so it counted for community service hours, too.

“We get to tag along at the same time,” said Ms. Cournoyer, noting that it was a sold out event, but they were able to go.

For her other community service hours, Ms. Hommel caused a bit of a stir at the high school. She said she got talking about Fridays For Future, the organization started by Greta Thunberg, the internationally known student-activist against climate change. Every Friday, students around the world strike (in Belgium it’s Thursday) to demand action from politicians on climate change.

Ms. Hommel created a power point presentation that she eventually showed to her class.

It started with a teacher catching her on her phone (she’s allowed to look up words), and then some skepticism from some corners.

“By the end of the day, the whole school was talking about it,” said Ms. Cournoyer.

Ms. Hommel said that one teacher was a bit of a hold-out. So Ms. Hommel asked her if she liked wine, and, of course, she said “yes.”

So Ms. Hommel told her that the vineyards are in trouble, and wine is going to suffer very soon because of climate change.

Ms. Hommel is also involved in extra-curricula activities, getting the full high school experience in the US. She is on the cheer­leading team, is in chorus, and will be in the Drama Club’s upcoming production of Little Shop of Horrors.

Ms. Hommel was born in Hungary, but her father is German, and they have been living in Hamburg since 2016. She has also lived in Hungary, Bolivia, Switzer­land, Italy, Peru, and Austria. She speaks Hungarian, German, English, Spanish, Italian and Latin.

Her interests include politics and world history. She credits her parents with always talking about politics and supporting her. She and her father, especially, talk politics a lot. She hopes to go to college to study international law, politics, diplomacy. 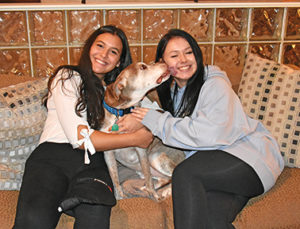 Alphie, a pitbull mix, gives Taylor Gall a kiss while hanging with CBYX/AFS exchange student Stella Hommel at her host family’s home in Fairhaven on 1/26/20. Photo by Beth David.

Would she recommend the experi­ence to others? Absolutely, said Ms. Hommel.

It is a year to focus on yourself, she said, and leave everything negative behind.

“It’s definitely a kind of freedom,” she said. “It will boost your self confidence, and make you more independent, a stronger person.”

So, what did she expect, when she started this proces so many months ago?

“I like to go through life without a lot of expectations,” said Ms. Hommel.

After all, if you have no expecta­tions, you can’t be disappointed. But, more importantly, “you always have to adjust anyway,” she said. “And not everybody’s going to like you.”

So, does she miss her little brother, her parents? A little, maybe. Actually, she is enjoying being an only child.