The third annual Seniors Talent Showcase, sponsored by Fairhaven Rotary, gave senior citizens a chance to strut their stuff on the stage in the Fairhaven Town Hal auditorium on Sunday, 4/29. The performers this year were mostly singers, but a pianist, harmonica player, and stand-up comedian also had their chance to wow the crowd. 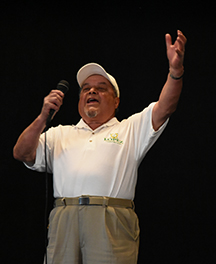 Spectators included a group from Our Lady’s Haven, and some folks who sang along or clapped during some songs that just called for it.

This year’s show was not a contest, however, but everyone got a gift for participating.

Charles Murphy, Rotary member and Fairhaven Selectboard member emceed the event. He pointed out that the venue has been made fully accessible for wheelchairs and the board is hoping to make the front of town hall accessible, too, instead of from the back door.

“It’s still a little hard to get around,” said Mr. Murphy, who is also the chair of the Fairhaven Commis­sion on Disability. 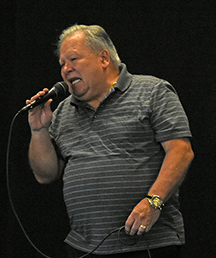 Paul Cabral sings Elton John’s “Don’t Let the Sun Go Down On Me” at the Fairhaven Rotary Club Senior Talent Show on 4/29/18. Photo by Beth David.

Paul Cabral, who sang in local bands for 30 years, sang two Elton John songs; Rod Lopez, who has been singing since “before grade school,” sang in minstrel shows in the 40s, and treated the crowd to two songs and got a big round of applause for his rendition of Tom Jones’s “Delilah”; Donald Baron sang “New York, New York,” and got the crowd going a bit with “Oh, Donna”; Paul Labonte brought up ol’ blue eyes, too, with his renditions of “My Way,” and “That’s Life.” 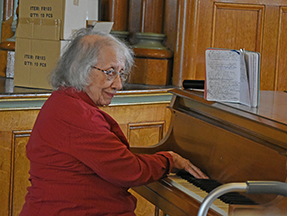 Lillian Fernandes gives the crowd a smile at the end of her performance at the Fairhaven Rotary Club Senior Talent Show on 4/29/18. Photo by Beth David.

Lillian Fernandes, played the piano in memory of her father, who inspired her to play. She says in her bio that playing the piano is relaxing and “good for the soul.” Mr. Murphy said that Ms. Fernandes had a difficult time getting there that day, but, “She does not take no for an answer.”

George Cataldo, aka the Silver Fox, wore his signature silver jacket and black bowtie. He performed his two tunes, but then managed to snag the microphone later on and tell a few jokes, too. He got the crowd singing along to “That’s Amore.”

Mr. C, aka Carlos “Charlie” Oliveira, who performed in nightclubs years ago, gave the crowd a taste of Elvis, with “Blue Hawaii” and “It’s Now or Never.”

Ed Kowalski pulled out his old harmonica a few years ago and taught himself to play all over again, and shared a couple of those tunes with the crowd. 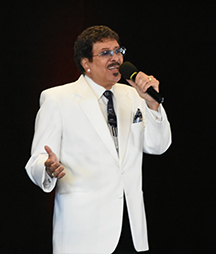 Richard Robert Pina, wearing a white suit jacket and black & white patent leather shoes, wowed the crowd with his renditions of “After the Lovin,” “Venus,” and “I’ve Got You Under My Skin.”

Ralph Beadsworth gave Elvis Presley and Fats Domino a try with “I Can’t Help Falling in Love,” and “Blueberry Hill.” 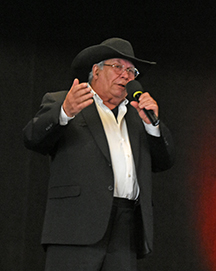 Albert J. Cote, aka, Cowboy Al, got the crowd singing and clapping at the Fairhaven Rotary Club Senior Talent Show on 4/29/18. Photo by Beth David.

Cowboy Al work his signature black cowboy hat and got the crowd going with his rendition of the Tom Jones song “I’ll Never Fall in Love Again,” and got them clapping to Glen Campbell’s “Rhinestone Cowboy.”

Wayne Vieira continued the audience participation playing his guitar with two favorite sing-alongs: “My Bonnie Lies Over the Ocean,” and “Down in the Valley,” and ended with “What a Wonderful Life.”

The performers were accompanied by David Antunes and Deborah Norris and their trusty karaoke machine. 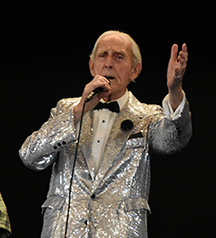 George Cataldo, aka ,The Silver Fox, performs at the Fairhaven Rotary Club Senior Talent Show on 4/29/18. Photo by Beth David.