The Fairhaven Selectboard held a pinning ceremony for Scott Gordon at its meeting on 2/10/20, elevating him to the rank of sergeant.

Police chief Michael Myers told the board that Sgt. Gordon has been an excellent patrol officer, and has also excelled as a detective for more than 10 years. The chief noted that Sgt. Gordon worked on the Michelle Carter case, which resulted in a conviction and an internationally known case.

He said Sgt. Gordon has done a “tremendous job” no matter what task has been assigned to him. He has been a School Resource Officer, patrol officer, and detective.

“It’s my pleasure to present him” for the promotion, said the chief.

Sgt. Gordon’s son Cam, with a little help from his sister Taylor,” pinned the new badge on this father.

After the ceremony, Sgt. Gordon said it was a “good opportunity,” and he was “looking forward to the challenges that come with it.”

He said it was time for something to move in his career, so he was happy the opportunity was available to him.

“He will do a great job for the town and the department,” said Chief Myers.

“I’m very proud of him,” said Sgt. Gordon’s mother Jill. “Everything he does, he does an excellent job. He’s a good man.” 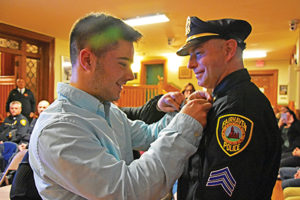 Cam Gordon pins the sergeant badge on his father Scott Gordon, while the hand of Cam’s big sister Taylor reaches in to help, during the Fairhaven Selectboard meeting on 2/10/20. Photo by Beth David. 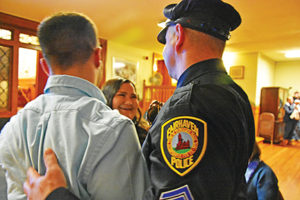 After hugging his son Cam, newly promoted Fairhaven police Sgt. Scott Gordon reaches for a hug from his daughter Taylor, after Cam pinned the new sergeant badge on his father at a ceremony during the Selectboard meeting on 2/10/20. Photo by Beth David.

Sgt. Gordon’s children said it was a mixed blessing having your father on the police force. Although they do take care of each other, they can also sometimes be even harder on officers’ children.

“It’s a little bit of both,” said his daughter Taylor, adding that she was proud of her dad.

“I’m happy for him,” said Cam, noting that he knew the “hard work he’s put into the job through the years.”

“We love him,” said Taylor. 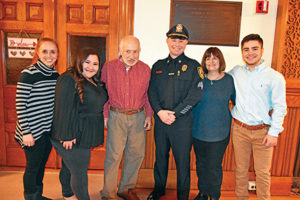 In other business, the board decided to pursue a property by eminent domain to build a public safety facility. Last year, the town issued a request for proposals (RFP) to acquire land for the facility. Only G. Bourne Knowles responded, offering to sell some or all of the property at 267 Huttleston Avenue.

The town followed up with a feasibility study that found the parcel to be uniquely suited to the town’s needs, and entered into negotiations with Mr. Knowles.

In a letter to the board that he read at the meeting on Monday, Town Administrator Mark Rees told the board that on 1/29/20, Mr. Knowles rescinded his offer in order “to pursue other offers for the land.”

Mr. Rees laid out three options: to reopen the search, recognizing the town has reviewed about 30 locations and found none of them acceptable; construct two buildings, one for fire and one for police, which would be significantly more expensive and would also not be as ideal for services to the public; pursue taking the land by eminent domain.

All three board members agreed to the third option. Town Meeting will have to approve the move.

“There are probably other options to consider,” wrote Mr. Rees in his memo. “But one option that is not available is the status quo. Every day that the town’s first responders are asked to work out of the current facility is [a] day where their ability to do their jobs is further compromised and, as a result, so is the Town’s ability to protect the life and property of its residents.”