Assessors told the board that residential and open space property (R&O) values have increased an average of 3.4%, while Commercial, Industrial and Personal Property (CIP) has increased an average of 5.3%. Because of the increase in value, property owners will not see a lower tax bill, even though the rate is lower. The rate is multiplied by the amount of the assessed value of the property to calculate the tax.

To calculate tax, home-owners need to get the valuation of their specific properties, and not use the average.

Selectboard chairperson Bob Espindola asked if the Selectboard and the Assessors could start discussing ways to decrease the shift, which is the difference between residential and commercial rates. The 1.75% is the maximum allowed by law.

He said the topic came up at the Economic Development Committee meeting, with some people feeling that the higher rate was deterring businesses from locating in Fairhaven.
Board of Assessors member Pamela Davis told the board that changing the percentage would only shift the burden to residential property owners. She recommended using TIF (Tax Increment Financing) agree­ments instead. TIFs are based on a number of factors, including how many jobs a company may bring to the town.

“That’s far more effective. Far more effective,” to attract new businesses to town, she said.
“I am familiar with [TIFs],” said Mr. Espindola, adding that he was hoping they could simply delay the vote to look into the possibility of making the change.

A quick review of the tight timeline with the state, and the Selectboard’s meeting schedule, though, made it clear that vote could not wait.

Town Administrator Mark Rees suggested that a change of that nature would require some study. He suggested that the board consider getting started now for a possible change in next year’s tax rates.

“I’m aware of what it means,” said Mr. Espindola, adding that the town should find out exactly what the impact will be.

Board of Assessors chairperson Ronald Manzone pointed out that Fairhaven has more infrastructure than many of the surrounding towns, such as town water and sewer.
Mr. Espindola agreed, noting that the school department had been praised at the same EconDev meeting he was referring to.

In any case, the lowered rate was welcome news.

Even if it does not mean that the tax bill, will go down with it.

The board voted to support the recommendations of the Board of Assessors. No members of the public spoke at the hearing.

In another matter, the board approved a request by Garth Rowe to use the Town Hall auditorium for a wedding on December 2. Selectboard member Daniel Freitas asked the board to waive the fee for Mr. Rowe because he is a call firefighter in Fairhaven. Mr. Rowe did not ask for the fee to be waived, but Mr. Freitas said he believed a town firefighter should be exempt from the $150 fee. The custodian fee of $29.72 would not be waived.

Mr. Espindola disagreed with waiving the fee. He said the fee is waived for non-profit organizations, not individuals.

Mr. Espindola said that if the town waives the fee for one person because he is known to the town, then it will set a precedent.

Mr. Freitas said he did not know Mr. Rowe personally, but felt that because he is a firefighter, he should get the fee waived. Mr. Freitas’s brother Eddie is a Fairhaven Firefighter.

Mr. Espindola still disagreed: “It’s a big bargain for a wedding,” he said.

Mr. Freitas made the motion to waive the fee and Selectboard member Charles Murphy voted with him to pass the waiver. Mr. Espindola voted against it.

The board also heard from Allen Decker of the Buzzards Bay Coalition, asking for the board to approve a conservation restriction on a piece of property on Sycamore Street, along the Acushnet River.

Although the parcel is owned by the ARR, Mr. Decker said that did not automatically preserve it. He said the Fairhaven Conservation Commission had already agreed to hold the Conservation Restriction (CR), but the Selectboard also had to approve it. A CR prevents a property from being developed.

Mr. Decker said the plan is for the parcel to be open to the public for passive recreation, such as hiking and wildlife observation. The property is mostly wetlands and marsh, but there is some upland, he said.

There are also PCBs (Poly­chlorinated biphenyls), which might be in high enough concentrations to prohibit use of the land right now.

Over time, however, he said the remediation that is ongoing in the river will improve the shoreline on both sides of the river.

The parcel has sections that are “core habitate” and “critical natural landscape,” so it is important to preserve it.

The parcel is not technically part of the Riverwalk project on the New Bedford side, but could some day be connected along Coggeshall Street.

Mr. Freitas seemed skeptical that the BBC was not asking for any money, or would ask for money in the future for the parcel.

Mr. Decker said that the land had already been acquired, and that the BBC was not seeking payment for the CR. He said future plans to enhance the property may require some funds, but he could not say for sure.

He said the ARR was created to preserve land along the river, and acquiring the CR would uphold those “conservation values” into the future.

Mr. Freitas, however, said he would not vote. He abstained, while Mr. Espindola and Mr. Murphy voted to sign the CR agreement. 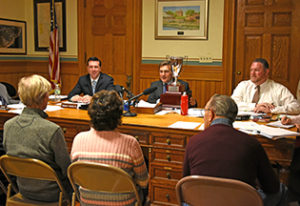 Fairhaven Selectboard Chairperson Bob Espindola (seated center), jokes about the age of the average Fairhaven participant in the 2017 South Coast Bikeway Alliance Summer Bike Challenge, just before he presents the trophy to some of the partiicpants at the Selectboard meeting on 11/20/17. The trophy will be on display at the Fairhaven Recreation Center for the year. Then it will be up for grabs again. To learn more visit http://www.southcoastbikeway.com/challenge.html Photo by Beth David.

On a lighter note, Mr. Espindola noted that Fairhaven had again won the South Coast Bikeway Alliance Summer Bike Challenge. After Fairhaven won four years ago, which was the first year of the Challenge, the trophy went to Mattapoisett two years in a row.

This year Fairhaven “wrested it back,” said Mr. Espindola, who is an avid cyclist.

The board also approved the transfer of an all-alcohol license to Cleary’s Pub, which will operate out of the former EJ’s Restaurant on Huttleston Avenue. Owner-operator Drew Tillett said he hoped to open within days of approval by the state, which would make opening day sometime in mid-December.