The Fairhaven Selectboard took time at its meeting on Monday, 10/30, to recognize the contributions of Town Curator, Albert Benac, who at 90 years old, is still growing his list of contributions to the town.*

Cathy Delano addressed the board saying that she was impressed with the list of things Mr. Benac has done for the town, including outright dona­tions. And the list “grew and grew,” she said.

She read from the list which included rescuing the time capsule from the Rogers School, a long list of restoring artwork and antiques, and quite a few instances of buying art with his own money and donating it to the town.

“He’s an unsung hero of Fairhaven, doing what needs to be done to better Fairhaven,” said Ms. Delano.

Mr. Benac told the board about his most recent acquisitions, which were some paintings by well known Fair­haven artists that the Colonial Club was about to auction off.

“So I bought them up,” said Mr. Benac. “And I’m donating them to the Town of Fairhaven.” 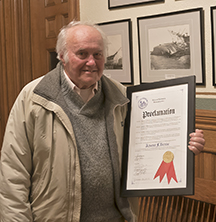 Fairhaven Town Curator Al Benac shows the proclamation he received from the Selectboard for his contributions to the town, many times funding projects himself. Photo by Bobby Bruso, Fairhaven Cable Access Director.

He said the artists are well known around the world and they are great pieces.

The board presented a proclama­tion to Mr. Benac, which reads, in part:

“Whereas: Albert F. Benac has made his presence felt in his role as Art Curator and as an involved citizen in the most exemplary way; as a true gentleman with unassailable dedica­tion; and, with positive persistence:

“Now, therefore, we the under­signed do hereby proclaim our sincere appreciation to Albert F. Benac for his civic engagement and for the example he has consistently set to all our citizens by his participation in, and championing of, Fairhaven’s unique history and future endeavors.”
*See the list on our website: www. neighbnews.com, scroll to “Archives.