The Fairhaven Selectboard approved the RFP for sale of the Rogers School property at its meeting on 1/10/22, and received an update on the issues with the Bijoux building at 350 Main Street.

The board also announced that the Collins Center and the Screening Committee are nearly ready to announce finalists in the Town Administrator search. Selectboard chairperson Bob Espindola said they should get the names at the next meeting on 1/24. It was unclear if the interviews would take place then or if another meeting would be scheduled.

The board also heard from Building Commissioner and En­force­ment Officer Chris Carmichael, who gave an update on the situation with the Bijou Theater building. Mr. Carmichael included a slide presentation that included pictures of the building that is in disrepair and not nearly up to code.

The owner of the budling, Julio Barbosa, was not present and did not speak via remote means at the meeting. He has placed large graffiti-style signs on the building accusing the town of racism in dealing with him as he tries to get the building ready for renting. The signs say “Black Lives Matter,” “Black Owned Building,” “Unfair Treatment End Racism.”

There are 15 apartments on the second floor and three commercial storefronts on the first floor. There is also a large room that was the theater.

In a letter to the board, Mr. Carmichael said the 1922 building  has “balloon framed” walls, which are no longer allowed. That type of construction leaves an open space from the top of the roof to the basement along the outside walls. This allows for smoke and/or flame to race up through the entire building.

Other fire hazard conditions include lack of insulation, no fire rated walls/ceilings, no fire separa­tion between units, no fire doors or fire suppression system.

“As buildings of this age have shown numerous times there is a strong likelihood that these problems would allow a fire to race throughout the building and entrap its occupants and first responders,” wrote Mr. Carmichael in his memo.

He also noted that Mr. Barbosa paid $300,000 for the building and has spent more than 1/3 of that on renovations, triggering the require­ment that he bring the whole building up to code.

Mr. Carmichael said that Mr. Barbosa has consistently gone beyond the scope of the work that he orignally got permits for. Three separate building inspectors have issued stop orders.

Mr. Barbosa also put paper on the inside of the windows so inspectors could not see what he was doing, said Mr. Carmichael.

He said it has been a “cat and mouse game” for the last year.

Mr. Barbosa bought the building in 2020.

Mr. Carmichael also showed photos that seemed to contradict Mr. Barbosa’s statements on the scope of work he was doing, including drywall.

The apartments do not have a proper second egress, and the building has no fire suppression, said Mr. Carmichael.

He showed a slide of one of the apartments with only one small window that was up above his head as the second egress.

“He wants to put veterans in there,” said Mr. Carmichael. “I wouldn’t let my dog sleep there.”

He also showed the old fire escape system, which is inadequate.

“No one will make it,” he said, it is too long and it ends in a vertical ladder.

Existing code says you cannot do that, he said, but it does not matter because, “No one’s going to make it to that point anyway.”

In the theater space, Mr. Barbosa has laid pipes across the center of the floor, which is against codes.

Mr. Carmichael also showed leaks and other signs of damage.

“You can see it had to be leaking for more than a dozen years,” he said on one slide.

He also noted several places, including the roof, where it seemed work had recently been done, although Mr. Barbosa denied doing such work.

Mr. Carmichael also turned to Rogers Reuse Committee chairperson Susan Loo, who agreed that he had denied her committee a permit to do some work at the school.

“So everybody gets treated the same,” said Mr. Carmichael, who also quoted a Neighb News article from 4/1/21 about Mr. Barbosa’s vision for the building.

In the article, Mr. Barbosa states that the regulations that Mr. Carmichael is insisting on will double the cost of the renovations.

“So it’s always been about the cost, and never about anything else,” Mr. Carmichael told the board.

He also listed the number of permits the down has issued, along with the number denied, saying there is “one set of rules.”

The Oxford Pub building, he noted, also had to put sprinklers in after they had a deadly fire.

Mr. Carmichael also noted that across the street, the Oxford School residences are being built. That process took years, he said, and is costing millions of dollars to bring the building to code.

Mr. Carmichael told the board that he wants to work with Mr. Barbosa to rejuvenate the building.

The board had no action to take and there was no public comment. 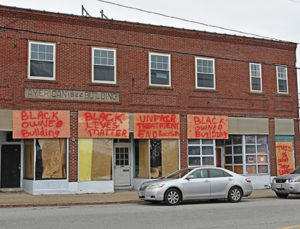 The owner of the Bijou Building, 350 Main Street, Fairhaven, MA, has placed graffiti-style signs on the building alleging unfair treatment by the town. Photo by Beth David.

The triggering event for the update was the placement the signs on the building.

Mr. Barbosa did not respond to two emails seeking comment.

According to Fairhaven police spokesperson Lt. Kevin Kobza, the police were called to town hall on 12/27/21. A town hall employee called when Mr. Carmichael and Mr. Barbosa had a verbal argument.

Neighb News sources contend that Mr. Carmichael told Mr. Barbosa he only had two minutes. When Mr. Barbosa objected, Mr. Carmichael reportedly shut him off from speaking and told him to leave the building. When he refused, someone called police.

According to Lt. Kobza, the police incident report indicates that Mr. Carmichael stated he had an appoint­ment in two minutes, and witnesses did observe people waiting in the hall, presumably for that meeting.

Lt. Kobza said nothing arrestable ocurred, and Mr. Barbosa left the building after speaking with police.

Both parties agreed on the basic facts, said Lt. Kobza except Mr. Carmichael clarified that the reason he cut Mr. Barbosa short was that he had a meeting scheduled.

Shortly after that the signs appeared on the Bijou building.

The board also approved the Request for Proposals to sell the Rogers School building.

The board wrangled over some language that was suggested by Town Counsel, adding 50 feet to the parcel to be sold.

Instead the board allowed language that indicates the town is flexible on the boundaries.

In other business, the board voted to create a gift account for Grimshaw Park to be able to accept an anony­mous donation of $20,000 to improve the property. The park was donated to the town in 1978 by Roger A. Grimshaw, who specified it should be for use by “the Senior Citizens of Fairhaven.”

Council on Aging Director Anne Silvia sent a letter to the board, and also presented to them at the meeting. The donor’s letter specifies that Ms. Silvia, alone, will have discretion on spending the money. If unable to, then the next COA director would control the funds. Ms. Silvia is set to retire shortly. Interviews for her replacement are currently taking place.

In his letter, the anonymous donor said he wanted the funds to be used “specifically and solely for the beautification of the Grimshaw Property.”

Ms. Silvia told the board that she and the donor worked out a plan to place six metal benches on the property, with low maintenance landscaping, a cement walkway, concrete pads for the benches, and wheelchair access to the benches.

Ms. Silvia’s husband Keith is on the SB, and he recused himself from the discussion and left the room.

The board also approved use of funds from the Route 6 Median Account to replace a plaque that has been missing for an usnpecified number of years from the entrance to Fairhaven on the New Bedford side.

A granite pillar on Route 6 is missing a plaque that was originally dedicated in 1902. It was lost for a number of years, but Mass DOT is in possession of it now and will cooperate in its reinstallation.

The funds are from an account set up to beautify the median on Route 6, but the state nixed the idea of plant­ings on the cobblestone median strip. The account has sat dormant for years.

“Because the plaque sits within the Route 6 median strip corridor, I feel this would meet the guidelines for use of the funds,” wrote Historical Com­mis­sion chairperson Wayne Oliveira.

The board agreed and voted to release the funds.

In another matter, the board  voted to approve three photos for the town annual report, which only requires two. The board ranked the three because members were afraid one of the photos was not a high enough resolution for the printer.

Vicki Oliveira, Assistant to the Town Administrator, said she would check with the printer and report back to the board at its next meeting. At that time she will reveal the names of the photographers.