A group of friends and supporters of the late Al Benac presented the town with a photo of Fairhaven’s long time Town Curator, who died on February 1 of this year. Martha Berg, Cathy Delano, and Eleanor Crowell  asked the town to accept the photo as a gift, and to place it somewhere in town hall in his memory.

As Town Curator, Mr. Benac saved many pieces of art and furniture from destruction: From oil paintings by famous and not-so-famous town residents, to old desks purportedly used by the town’s benefactor Henry Huttleston Rogers, to documents and the sidewalk in front of town hall. 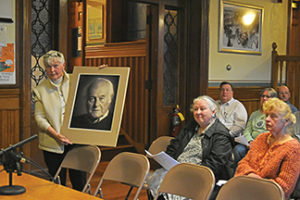 Mr. Benac did his best at every opportunity to rescue and preserve anything that was part of Fairhaven’s past. He often bought pieces with his own money and donated them to the town, or used his own funds to pre­serve others when his meager town budget of $1,500.00 was expended.

Back in October, 2017, the Select­board recognized Mr. Benac with a proclamation noting his use of personal funds to preserve art, his diligent and devoted attendance at town meetings, and his “innumerable hours” working with the Fairhaven Historical Society and the museum.

At that meeting, Cathy Delano read a long list of Mr. Benac’s accomplish­ments, with details of the various pieces he had saved throughout the years.

At Monday’s meeting, Ms. Berg told the board that the group stumbled on the photo of Mr. Benac quite by accident. They were at the picture framer, Subtext, in New Bedford, when the owner, Henry “Hank” Gatlin, told them he had taken a photo of Mr. Benac, and showed it to them.

“We were stunned when we saw it,” said Ms. Berg.

She said that if the town agreed to accept it, the group would have it framed to be hung in town hall. 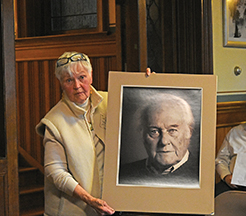 A closer look at the photo of Al Benac, which was taken by Henry “Hank” Gatlin, a framer who owns Subtext in New Bedford. The board agreed to accept the photo and will hang it in the town hall after it is framed. Photos by Beth David.

Selectboard member Charles Murphy thanked Ms. Delano for her list of Mr. Benac’s achievements back in October, which resulted in the town present­ing the proclama­tion to him.

“I think it’s an excellent idea,” said Mr. Murphy of accepting the photo. “He really brought so much to our town hall.”

All three Select­board members voiced support for the idea.

“He deserves to be on our wall as much as anybody else,” said Select­board chairperson Daniel Freitas.

Ms. Delano said she hoped the board would opt to place it upstairs in the town hall auditorium next to some artwork that Mr. Benac had collected for the town.

In a follow-up email, Ms. Berg said that Mr. Gatlin was framing something for Mr. Benac and asked if he could take his picture. Mr. Benac agreed, but grew impatient with the process.

“Al never engaged him to be photographed. It was a spontaneous decision,” said Ms. Berg in the email. “It was a warm day, and Al tired of having his picture taken. He wanted it to be over. ‘Just one more,’ asked Henry. And that was the photo everyone saw tonight.”

The group will have the photo framed and the board will hold a ceremony to commemorate its acceptance and placement in town hall. Mr. Murphy suggested a date around May 16, which is Mr. Benac’s birthday.

Selectboard member Bob Espindola mused that Mr. Benac had been the town curator for so long that it would be difficult to even describe the role.

One thing is certain, however, it would have fallen to him to have the picture in question framed. •••