Members of W.H.A.L.E. (Waterfront Historic Area League) presented a large framed photograph by Peter Pereira to the Fairhaven Selectboard at its meeting on Monday, 12/18/17.

The photo, a view of the town hall and Fairhaven center from a high point of the Unitarian Memorial Church, has no people in it, noted Mr. Pereira, which is rare for him, he said. An accomplished photo­journalist with the Standard-Times, and a local celebrity, Mr. Pereira has won numerous awards, and his photos have appeared all over the world. 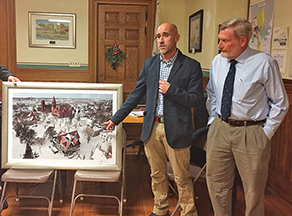 Photographer Peter Pereira (LEFT) talks about the photograph he took that was donated to the town of Fairhaven in honor of Jeffrey Osuch (RIGHT). Photo by Beth David.

WHALE donated the photograph to the town in honor of former Fairhaven Executive Secretary Jeffrey Osuch, due to his diligence in taking care of Fairhaven’s historic town hall, said Phil Beauregard, who spoke on behalf of WHALE at the meeting.

“I really treasure this moment. I really do,” said Mr. Pereira as he talked about taking the photo on a snowy day.

He said it was an honor to have his photograph hanging in a building with as much history as town hall.

“Photography is a visual record of our time,” said Mr. Pereira. It gives people a glimpse into a moment in time, even from 100 years ago.

He said most of his photographs have people in them, so the one WHALE donated was rare.
Mr. Osuch said he appreciated serving the town for 28 years, and that preserving town hall was a team effort. He credited the janitors who did most of the work, except in only a couple of areas, where they had to hire specialists.

“It takes a team effort,” he said, adding that he gave direction and got the funding, but it was town employees who did the work.

He recalled that the town hall auditorium had been deemed unsafe, but he got a structural engineer to take a look. They discovered it was safe, and restored it. Now it is a beautiful space, with large, stained glass windows and a magnificent ceiling. It is used throughout the year for a variety of events, including concerts, plays and films. It is also now being used as the cable access television studio.

The photograph will hang in town hall, but the exact spot has not been decided yet.

In other business, the board appointed seven members to the newly created Town Clerk Study Committee, which will study the pros and cons of keeping the town clerk position as elected, or making it an appointed position. Members of the committee are: Mark Badwey; Kyle Bueno; Town Treasurer/Finance Director Wendy Graves; Assistant Town Clerk Carolyn Hurley; Town Clerk Eileen Lowney; Ann Richard; Bernie Rodericks; and Anne O’Brien as the town hall representative.

The board also approved a letter to John Bullard, Regional Adminis­trator, National Marine Fisheries Service, asking that he “take swift action” to get the fishing vessels and crew members of Sector 9 back to work. Mr. Bullard shut down the sector completely because of the criminal activity of Carlos Rafael, who owned all the permits and boats in the sector. Mr. Rafael is serving 46 months in a federal prison for his crimes.

The ruling by Mr. Bullard prohibits 21 vessels and 80 crew members from fishing, with repercussions of that ban affecting more than 300 other workers that support the ground fishing industry.