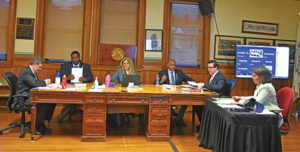 The Fairhaven Select Board met for the first time after the election, with five members for the first time in the town’s history. The long meeting covered a lot of ground including Town Meeting articles, discussion of the flag/banner flying policy, reassign­ment of committee liaison appoint­ments, and approval of  locations for the movie “Finestkind,” which is filming in Fairhaven over the next few weeks. It was also the first meeting for Angeline “Angie” Lopes Ellison, the new Town Administrator.

When it was time to reorganize the board, SB member Keith Silvia nomi­nated Stasia Power, seconded by Charlie Murphy.

“I’m good with that,” said Bob Espindola, who was the sitting chair.

Ms. Ellison ran this portion of the meeting.

A bit more discussion ensued over the appointment of Vice Chair, with both Mr. Espindola and newcomer Leon Correy nominated.

Mr. Espindola expressed some concern that the transition from himself to Ms. Powers would not be as smooth if he were not Vice Chair.

Mr. Silvia advocated for Mr. Correy, saying he got the second highest number of votes in the election.

Mr. Correy said they would still have the benefit of Mr. Espindola’s expertise because he is still on the board. Mr. Correy said people would not have voted for him if they did not think he could do the job. 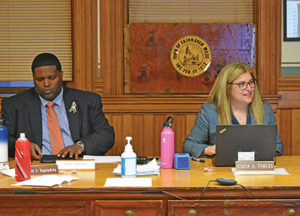 Stasia Powers sits in the middle seat after being voted in as chair of the Fairhaven Selectboard at its first meeting with five members on 4/11/22, with Leon Correy (LEFT), a newcomer to the board, voted in as Vice Chair. Photo by Beth David.

In the end the board voted for Ms. Powers to be the chair person and Mr. Correy to be Vice Chair.

Mr. Eillison then passed a hat around with numbered slips of paper for each member to pull out. The only assigned seat, she said, was the middle one for the chairperson. The others would be assigned randomly by the drawing.

Then the official board shuffle took place as each member moved around the table.

The board spent a considerable amount of time assigning liaison appointments to the various boards and committees that need to have a Select Board contact. Each member will have four committees. In addition to town boards/committees, an SB member also represents the town on SRTA (Southeast Regional Transit Authority) and SRPEDD commissions (Southeast Regional Planning and Economic Development District).

The board also welcomed Veterans agent Brad Fish and local veteran George Brownell to approve the Memorial Day parade route. The parade has been canceled for two years due to the pandemic.

Marchers will meet at 9:30 a.m. near Main and Union Streets and will step off at 10 a.m. Marchers will travel along Main Street to Riverside Cemetery with a stop at Fairhaven High School to raise the Big Flag. There will be a short ceremony at Riverside.

All veterans are encouraged to march and the public is asked to line the route and attend the ceremony at Riverside.

Mr. Fish also announced that volunteers will place flags on the graves of all veterans on Saturday, 5/21. Anyone who wishes to help should go to Riverside Cemetery at 10 a.m. Call the Veterans Agent office at town hall with any questions.

The board voted unanimously to approve the parade and route, its first vote as a five-member board.

The board also approved some slight changes to the schedule for filming the movie “Finestkind.” Locations have not changed, but some dates have.

The board voted to allow Harbor­master Tim Cox and police and fire departments to work with the film crew and authorize any changes that may come up during filming. The board also voted to allow the company to keep its trucks on the street overnight as needed.

In another matter that has been bounced around for a couple of years, the board voted to allow the Pride Flag/banner to be displayed on town hall for Gay Pride month in June. There is only one  spot for a banner on town hall and the Homecoming Day Fair has it reserved for the last two weeks in June. The board authorized the placement of the Pride flag and asked the Belonging Committee, via Mr. Correy, to look into other locations for the remaining two weeks.

Board of Assessor member Ronnie Manzone, a transgender woman and well known former Select Board member, spoke in favor of hanging the Pride banner.

“I care about people,” she said, adding that when she was on the SB it was to bring people together. “I never realized the importance of that flag until I lived the lifestyle. And I’m proud of what I am today.”

“And I can’t think of a better way for this community to express that,” she said. LGBTQI people are “under siege” in this country.

The board also discussed the flag policy that the town adopted, then rescinded.

Ms. Powers noted that the  controversy seemed to revolve around flying a flag on the same pole as the US flag.

The former policy calls for a 60-day notice to request flying or hanging a flag on town property, and the board agreed to keep that.

Ms. Ellison asked for some context/history on the policy.

Mr. Silvia said he had questioned it originally because he had gotten requests or inquiries about flying offensive flags, with people ascertaining that if the town flew one, it should grant any request.

But #2 of the policy clearly states that the only flags allowed will be those acknowledging a proclamation from the federal government or the state, and banners announcing upcoming events.

Mr. Silvia also expressed concern about who would be liable if there is vandalism to a flag or banner and town property is damaged.

Mr. Espindola said the town had insurance; Ms. Powers said the town would handle it the way they handle all graffiti/vandalism; Mr. Correy said the vandals would be liable.

At the suggestion of town resident Doug Brady, the board voted to hold off on adopting the policy to give the Belonging Committee time to look into the way other municipalities handle flag/banner requests.