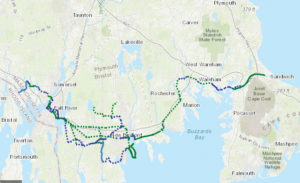 Southeastern Massachusetts, July 31, 2020 – The South Coast Bikeway Alliance (SCBA) and the Southeastern Regional Planning and Economic Development District (SRPEDD) are pleased to announce that they have been awarded a 2020 MassTrails Grant. The grant, totaling $40,000 will fund Phase II of a feasibility study examining routing of the South Coast Bikeway between Fall River and New Bedford, through Westport and Dartmouth.

The South Coast Bikeway, once realized, will be a 50-mile continuous system of paths and bike lanes that will connect Rhode Island to Cape Cod. Cities and towns included in this plan are Swansea, Somerset, Fall River, Westport, Dartmouth, New Bedford, Fairhaven, Mattapoisett, Marion and Wareham. The Feasibility Study will help determine the best route to close a gap that has long existed in the East Coast and MA trail networks between the Gateway Cities of Fall River and New Bedford. It will also examine critical links within Dartmouth and Westport and with the anticipated South Coast Rail Commuter Rail Project.

This project will continue to build on the work being completed by SRPEDD under Phase I, which was funded by SCBA and the individual municipalities of Westport, Dart­mouth and New Bedford through Community Preservation Act (CPA) funds. The SCBA has also received a generous donation from Bay Coast Bank in the amount of $10,000 towards the study.

“We are very excited and grateful to the MassTrails Program and every­one involved for this opportunity to continue to work towards closing this very critical gap in the South Coast Bikeway network,” said Jackie Jones, Bicycle and Pedestrian Coordinator at SRPEDD. 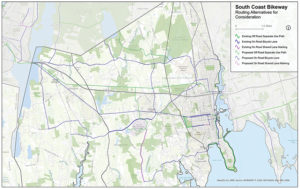 The SCBA is a non-profit organiza­tion made up of community repres­enta­tives and groups that work with local leaders and organizations to advocate for and build the networks of bikeways throughout the South Coast region. The SCBA’s overall goal is to promote active transportation and recreation.

SRPEDD is the regional planning agency for the 27 communities that make up the Southeastern Massachu­setts Region. Governed by a Commis­sion of local officials and citizens, SRPEDD plans for the region’s land use, transportation, economy and environment while assisting member cities and towns to operate more efficiently. SRPEDD seeks to be a regional resource — a servant of local public servants and community groups, connecting the dots between local municipal needs and the funding, community outreach, and proactive planning resources that can address them.

MassTrails grants support the state’s vast network of trails with projects dedicated to the construc­tion, maintenance, and improvements for a variety of public trails, including hiking trails, bikeways, and shared-use paths. Funding for MassTrails Grants comes from the Massachu­setts Department of Conservation and Recreation’s (DCR) capital budget, and from the motor fuel excise tax on off-road vehicles including ATV’s and snowmobiles, which is provided by the U.S. Department of Transportation and the Federal Surface Transportation Act, in coordination with the Massa­chu­setts Department of Transporta­tion (MassDOT). All MassTrails Grant applications have been reviewed in consultation with an inter-agency MassTrails Team and the Massachu­setts Recreational Trails Advisory Board (MARTAB).

This is the SCBA’s second success­ful MassTrails grant, following a $6,800 Trails Education Grant in 2017

The SCBA and SRPEDD would like to congratulate fellow South Coast MassTrails grant recipients including the town of Mattapoisett, the City of New Bedford and the town of Wareham.