After the collapse of the process, for a second time, in the search for a Town Administrator in Fairhaven, the Select Board voted to interview just one person for the position.

The board had been ready to interview three candidates last week, but then two dropped out. It is the second time that happened.

At its meeting on Monday, 2/7, the board voted to amend its process that required interviewing a minimum of two people for the position.

SB Chairperson Bob Espindola outlined several possibilities for pro­ceeding. He said they could amend the process they had outlined so the board could interview fewer than two candidates; they could restart the process with a new salary and bonus or incentive structure; continue to work under the current arrangement with Finance Director/Treasurer Wendy Graves also acting as Interim Town Administrator, and former TA Mark Rees working on special projects; they could bring in a new Interim TA to allow Ms. Graves to return to her finance/treasurer job full time and relieve the strain on her.

Mr. Espindola said he was not in favor of any one of those scenarios, but simply wanted the board to discuss them and any possibilities they might have.

Mary Alcardi of the Collins Center, which ran the search, joined the meeting via Zoom and said that the Screening Committee had done its job as laid out in the process. She said her firm would continue to work to find a TA without added cost to the town, except for advertising.

Ms. Alcardi said she did not want anyone to think the caliber of the candidates was not good. She said the failure of the process was not a reflection on the town. It is a reflection of the numbers, she said.

Mr. Espindola asked if they could bring up to finalist status any of the  other candidates that the SC had interviewed. Ms. Alcardi said they only put forth the “A” candidates, not the “B” or “C” candidates.

SB member Keith Silvia said he agreed that the committee did its job and they had three qualified candidates. He said it was “unfortunate” that two withdrew, but that still left one top candidate.

He said he would like to interview her as soon as possible.

“This has gone on for more than a year,” said Mr. Silvia.

SB member Stasia Powers agreed with Mr. Silvia, saying that the Ms. Alcardi was thorough and they should give the last remaining candidate, Angie Lopes Ellison, a chance.

“I have some reservations about doing that,” said Mr. Espindola, adding that the important decision deserves a comparison of at least two  people.

He said he did not want to prolong the process, either, but he wanted to make sure that the problem is not about compensation.

Ms. Alcardi had provided the board with a comparison of other towns in the region and what they pay for a TA position.

Ms. Espindola noted that the COA director search included several candidates. He said suppose the interview does not go well with the one candidate, they do not  hire her, is it fair to her.

He said they could restructure the position statement to get different results, including adding a range for the salary and maybe a bonus.

Mr. Espindola said he understood the timing was difficult, and that recruitment for top jobs is difficult in the private sector, too.

Ms. Alcardi said it was a good point, and although she does not like to talk about other searches, she said the center is fielding inquiries from several different communities. Bourne still has not hired anyone, and Plymouth also had to try again even though the salary is more than $200K.

Mr. Silvia said he looked at it a different way, that if they keep trying and losing out on the process that candidates will think something is wrong with the town.

Mr. Espindola said the first question he ask Ms. Alcardi was that very thing and she pointed to salaries in other communities. He asked if the process would be quicker this time.

Ms. Alcardi said it would be a little shorter, but not by much, a couple of weeks.

She also said the market is going be tougher with more retirements.

She noted that they lose no time if they conduct the interview for Ms. Ellison right away.

“I know it’s awkward,” she said to say yes or no for one person. “But we’re all grownups.”

She also said she did not recommend extending the search again. She recommended starting a whole new search.

She noted that there’s nothing wrong with Fairhaven.

Mr. Espindola asked if any of the other candidates could be “elevated,” but Ms. Alcardi said the committee would only put forward the best candidates.

“I feel we have a candidate, she knows what the salary is,” said Mr. Silvia, and they had to get things moving.

Ms. Powers noted that a lot of things have been put on hold waiting for the new TA.

“And we could lose her,” said Mr. Silvia, meaning Ms. Ellison.

The board voted to amend their process and will interview Ms. Ellison at a special meeting on Thursday, 2/10, at 6:30. 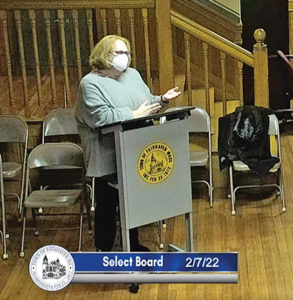 Martha Reed, the new Council on Aging Director for the town of Fairhaven, gestures while speaking to the Selectboard on 2/7/22 when her appointment was approve in a unanimous vote. Screen shot photo from Fairhaven government access online video.

The board also approved the appointment of Martha Reed as Council on Aging director, replacing Anne Silvia, who has retired.

Ms. Reed has an extensive history working with the elderly population, most recently with Catholic Social Services.

Interim Town Administrator Wendy Graves hired Ms. Reed and said she was “very passionate about the care and well-being of elders.”

“I’m just so excited to start this position,” Ms. Reed told the board. She said the Fairhaven COA had a “stellar reputation.”

She said she was looking forward to the next few weeks while Ms. Silvia would be working with her to transition.

“I know my wife’s happy,” said SB member Keith Silvia, referring to the outgoing COA Director. “She has total faith in you.”

Ms. Reed said that Ms. Silvia has made such a difference.

“I am so lucky to take over for her,” said Ms. Reed, adding that Ms. Silvia is leaving a well organized machine.

Ms. Reed also said she would be keeping the programs that Ms. Silvia started, and restarting the ones that got put on hold due to the pandemic, saying she was a firm believer in not fixing something that works.

Ms. Reed has worked at CSS for 14 years in a variety of positions, including grants and compliance, parish and community outreach, anti-poverty grant management, and coordinator of affordable rental housing programs. She also has experience overseeing housing complexes for the elderly, and has been a resident services coordinator and property manager.

Ms. Reed told the board that much has changed in society in the last 30-40 years, especially with technology. She said it is important for older people to have someone to look out for them if they do not have family to help them.

She said she is “very concerned” about the high cost of housing, that it is a passion of hers, and she believes it is important to try to maintain people in their own homes.

The board voted unanimously to approve the appointment.