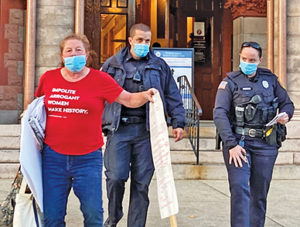 Diane Hahn is escorted out of Fairahven Town Hall by two police officers after a Town Hall employee called the police on 11/16/20 when a group protested before the Board of Healthl meeting and Ms. Hahn entered the meeting to deliver some printed materials to the board members. Photo by Jean Perry.

A group of citizens converged at the steps of Fairhaven Town Hall Wednesday afternoon, 11/16, with the intent to make their presence known. “Hey, hey! Ho, ho!” they shouted. “This Board of Health has got to go!”

Fairhaven resident Diane Hahn organized the demonstration that drew more than a dozen participants, in­clud­ing three former Health Depart­ment employees who were either fired by the BOH or received a finan­cial settlement upon their resigna­tion. There she launched a campaign to gather signatures to recall Board of Health members Peter DeTerra and Michael Ristuccia, and Selectboard Chairperson Daniel Freitas.

Fairhaven resident Martha Berg thanked Ms. Hahn for giving her, her husband Gunnar, and the other residents a voice that afternoon. Ms. Berg said she had wanted to vent her frustration over what she has been reading in the local media about the BOH’s behavior, including Mr. DeTerra’s violation of Governor Charlie Baker’s pandemic restrictions on 8/29 when he hosted a wedding at his property with more than 150 guests.

“I do feel that the leadership in the Board of Health violated the state mandate on public gatherings, and he’s expected to lead us seniors into safety,” Ms. Berg told the Neighb News. “I consider that to be a disappointing example.” 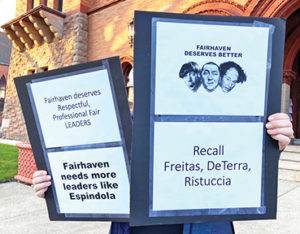 A protester holds up a sign likening the three Fairhaven town officials, Selectboard chairperson Daniel Freitas, Board of Health Chairperson Peter DeTerra, and BOH member Michael Ristuccia, to the Three Stooges at a protest outside of Fairhaven Town Hall on 11/16/20 before the BOH meeting. Photo by Jean Perry

What began as a small group of four soon grew to seven, nine, and then a dozen. Each held a sign calling out “corruption” and “bullying” or for a recall of Mr. DeTerra, Mr. Ristuccia, and Mr. Freitas. One poster featured a photo of The Three Stooges with “Fairhaven deserves better” above it.

Resident Beth Luey donned a brown monastic robe and held a sign she made calling for the three town officials to “repent” and “resign.” She later added “recall” to it to complete the alliteration.

“I’m frustrated that we have no Health Department in the middle of a pandemic,” Ms. Luey said.

The group remained socially dis­tanced and masked as they chanted and called for “public servants, not self-servants.”

Meanwhile, employees inside Town Hall peeked through the windows to see what all the commotion was. At one point, Ms. Hahn opened the front door to Town Hall to allow the voices of the people outside to echo through­out the building just as a 4:00 Board of Health meeting was about to start.

Ms. Hahn entered the Town Hall intending to deliver a typed letter to the Board of Health, requesting she be added to a future agenda meeting. She was met at the entrance of the meeting room by BOH member Geoff Haworth who used his body to physically block Ms. Hahn from entering the public meeting, but to no avail. She merely pivoted and spun around him, and delivered that letter to each BOH member before she exited the room, met at the door by two Fairhaven police officers who escorted her back outside.

The street outside Town Hall was suddenly besieged by five police cruisers and an unmarked police car arriving in response to a call that came from a Town Hall employee. Ms. Hahn was questioned while fellow protestors observed. After an officer eventually told Ms. Hahn that she was free to continue her demonstration, two protesters shared that they felt intimidated by the continuing presence of at least four police officers who remained nearby talking and watching from the sidewalk.

Still, the chants continued, and the group solicited the signatures of some passersby for their recall petitions. One woman walking her dog approached and asked what the petition would accomplish. 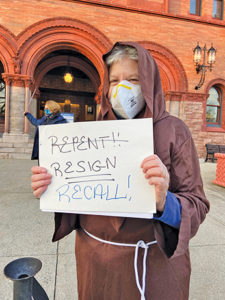 One more thing! Beth Luey updates her sign to include “recall” to her alliteration at a protest outside of Fairhaven Town Hall on 11/16/20 before the Board of Health meeting. Photo by Jean Perry

“To recall the Board of Health!” Ms. Hahn called out.

“Heh, what Board of Health?” the woman replied sarcastically.

“Exactly!” the protestors shouted back.

Dartmouth resident Susan Griffin quietly stood holding a sign she picked up when she arrived. Ms. Griffin explained that she was the health inspector from 2004-2014 when she left her position after alleging in late 2013 that she had been the victim of Mr. DeTerra’s repeated and ongoing harassment. Her allegations were similar if not identical to some of the complaints Health Agent Mary Freire-Kellogg made public before she was fired from her position o 9/28/20.

“So, here I am today,” Ms. Griffin told the Neighb News, in support of Ms. Freire-Kellogg and also the citizens of the town. “The people of Fairhaven deserve better.”

Visit https://youtu.be/D_hybPThw28 for video of the protest

See page 19 or click here for coverage of the Board of Health meeting.