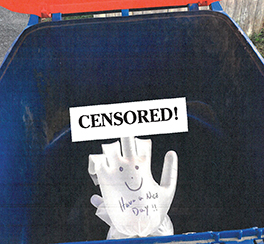 This filled up glove, with the middle finger sticking up, was left in the recycle cart at the Green Street, Fairhaven, residence of Dr. Brian Bowcock, a former long time Selectboard member and former Tree Warden, after an altercation at the residence between a woman and the recycle checker two weeks before. In a brief phone interview, Dr. Bowcock said he had no knowledge of the altercation or the glove before abruptly hanging up. Photo from the Fairhaven Health Department, with a certain alteration in the interest of decency made by the Neighb News.

By now, most residents in Fairhaven know that the recycle carts are being checked by several people who are being paid with a state grant to the Health Department. The purpose of the “Recycle IQ” program is to eliminate contamination in the carts. That means, to make sure the carts only have items that can be recycled by the company that accepts the carts. To be sure, there are many items that are indeed recyclable out in the wider world, and that used to be allowed in the carts, but now are not.

With the changes in the rules, there has been some confusion. The Board of Health has run ads, created a video, run press releases in local media, has posted on social media, and has done several mailings to all the households in Fairhaven.

Some people have figured out that a lot of items are no longer accepted in the carts and have to go to other places to be recycled, or need to go in the trash.

Some people have gotten angry.

And some people have taken that anger out on the recycle checkers.

The program is not supposed to be punitive. There are no fines. If there are only a few offending items in the cart, and the resident is there, then the recycle checker will help make the cart compliant and not reject the whole load.

A couple of weeks ago, the checkers got an earful from a woman at the residence of former Select­board member and Tree Warden, Brian Bowcock.

According to an incident report provided to the Neighb News after a request filed under the Freedom of Information Act, Health intern Dan Shea reported an encounter with an “irate resident” at 51 Green Street on 8/2/18.

Mr. Shea found “numerous items” that did not belong in the cart, such as coat hangers and plastic. The woman was “very agitated” according to the report.

Mr. Shea offered to help the woman make the cart be in compliance by re­moving the items that were not allowed. She took the items and “threw them on the lawn,” reads the report. “She then aggres­sive­ly grabbed the bin and stated this is ridiculous and rolled the bin up her drive­way. She did not leave the repaired bin out for collection.”

Fairhaven Health Agent Mary Freire-Kellogg sent a letter to the address, to the attention of the three people listed as resi­dents, al­though the names were redacted from the released copy. According to town records, Brian Bowcock owns the home and lives there. Also listed as a resident is Maria Cardoso, Dr. Bowcock’s long time companion.

In the letter, Ms. Freire-Kellogg explains the changes in the program and offers to meet with the residents to explain further. She does not mention the altercation from 8/2 or the glove.

“Dear Resident, I received your message and I sense you have some frustration with the new Recycle program,” the letter begins.

In a separate incident report on 8/3/18, Ms. Freire-Kellogg writes that Board of Health Member Michael Silvia had a conversation with her about the recycling program and the changes.

“He began chuckling and told me one of the people he knows was going to put out an empty recycle bin with a glove with a middle finger up,” reads the report.

When contacted by phone, Dr. Bowcock said, “I don’t know what you’re talking about.”

The Neighb News asked for a phone number for Ms. Cardoso to ask her about the incident, or if Dr. Bowcock would ask her to contact the paper for comment.

As a reporter was trying to describe the glove to ask if Dr. Bowcock had any knowledge of it, he interrupted and said, “I’m real busy at the moment. I don’t have time for this foolishness.”

He said if “anyone can shed light on it,” he would contact the paper.

When asked if he was saying he knew nothing about the glove or the altercation, Dr. Bowcock hung up the phone.

Ms. Cardoso could not be reached for comment for this article.

The Board of Health is an elected board that oversees the health department, including the position of the Health Agent. The Health Department administers the recycling program. The Board of Public Works is responsible for the trash contract.

Fairhaven’s trash is taken to SEMASS, the waste-to-energy plant that burns trash to create electricity.