The weather gods delivered a mixed bag to the plungers at Sunday’s annual Polar Plunge at Fort Phoenix in Fairhaven. Rescheduled from January 1 because of dangerously cold temperatures and wind, the plunge was held Sunday, 1/28, with the temperature at 45 degrees, the water at 37, and steady rain. 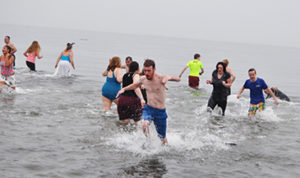 Participants of the annual Fort Phoenix Polar Plunge jump into the Atlantic Ocean on Sunday, 1/28/18, in Fairhavnen. Photos by Beth David

Several hundred peopled showed up for the morning event. How many would actually jump in the cold water, however, was anyone’s guess.

This year’s theme was “your favorite Disney character,” and people were encouraged to dress up accordingly. Sharks and mermaids and Minnie Mouse were among the famous participants.
Music from various Disney movies, including Julie Andrews singing “A Spoonful of Sugar,” rang through the air.

Then the countdown, and every­one ran in…and then out.

The annual event, in its 17th year, is held in honor of local domestic violence victims.
Zachary Guillotte, 17, said he was there because his friend, Aubrey Stalter, 17, made him do it. The two attend Fairhaven High School together.

Ms. Stalter said she has been participating in the plunge for six years. 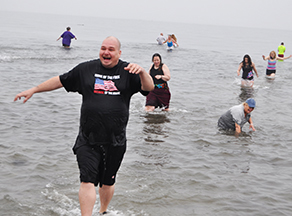 Participants of the annual Fort Phoenix Polar Plunge jump into the Atlantic Ocean on Sunday, 1/28/18, in Fairhavnen. Photos by Beth David

Mr. Guillotte said he was not worried about how he would react to the cold water.

“I’ve jumped in cold water before,” he said, but, he added, that was his friend’s swim­ming pool, not the Atlantic Ocean.

Ramona Rodriguez, 60, was there with her sons, Khalil Rodriguez, 36, and Niheem Islam, 33, who have been participating for a few years.

They said they did it because Ms. Rodriguez suffered domestic violence herself.

“It’s a great cause,” said Khalil. “It unites us as a family and kind of washes those memories away.”

Ramona said she had to have surgery due to her injuries.

“He’s gone,” she said of her abuser, who spent eight years in prison for the attacks. 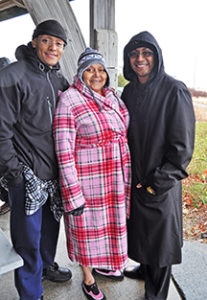 L-R: Khalil Rodriguez, Ramona Rodriguez, and Niheem Islam look nice and warm before jumping into the chilly 37-degree water at Fort Phoenix on Sunday, 1/28/18, for the annual Polar Plunge. Photo by Beth David.

“I like the cause,” said Niheem, adding they did it together to support his mother. “Because I saw my mom being abused.”

“My legs are numb” said Elaine Olifierko after she got out of the water. “It’s biting. My legs are absolutely numb.” 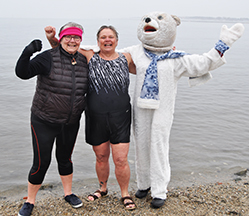 L-R: Elaine Olifieko and her sister Mary Ann Walker, pose in triumph with the Fort Phoenix Polar Bear at the annual Polar Plunge on Sunday, 1/28/18. Photo by Beth David.

She jumped in to join her sister, Mary Ann Walker.

Ms. Walker said she has been plunging for years because it is for Domestic Violence awareness. She said she knew Nancy Schonheinz of Fairhaven, who was killed by her boyfriend in 2000 when he stabbed her 44 times. The first plunge was started in her name, and went for ten years. Then a new group took over in 2010.

She said she appreciated her sister joining her, and that everyone needs to keep doing whatever is necessary to bring awareness to the issue of domestic violence.

“Because it will never stop,” she said.

And, having her sister dive in with her, “means a lot.”

“Well, I’m thrilled,” said Ms. Olifierko, although the sincerity of that statement was seriously in doubt.

Anyone who still wishes to contribute may buy a t-shirt at Days Sports in Fairhaven.

More scenes from the Polar Plunge 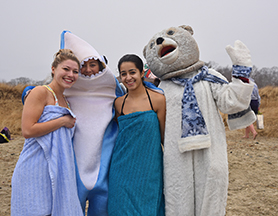 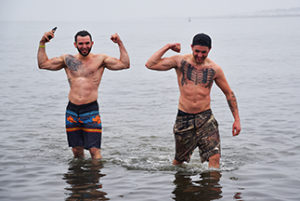 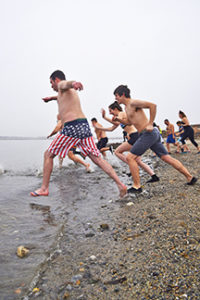 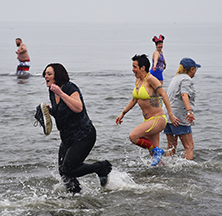 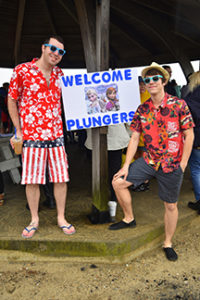