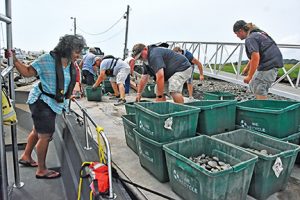 The Fairhaven Marine Resources Department has completed this year’s quahog relay. On Thursday, 7/28/22, department employees trans­planted the last 60+ bushels, bringing the total to 600 bushels transplanted in Round Cove.

The program uses quahogs from the polluted Taunton River, and puts them in clean water. The quahogs are self-cleaning, and will propagate twice in the next year as they sit in the clean water. Next season, samples will be tested, and, hopefully, will come out clean. Then the cove will open and permit holders will be able to harvest them. Round Cove is closed to shellfishing now.

The quahogs were unloaded from the back ramp at West Island Marina onto a floating dock/barge tied to the Harbormaster boat. Captain Todd Cox maneuvered the boat as close as possible to the shore while his father Tim and shellfish deputies Brandon Estrella and Corey Pitraszek tipped the totes over to slowly dump the quahogs into the cove.

Ms. Ellison even took a try at it.

She said she wanted to see some of what the HM and crew did in their jobs.

“This is awe­some, incredible,” said Ms. Ellison, adding that people take Fairhaven’s natural resources for granted, but the harbormaster and crew make it possible to enjoy the resource.

Harbormaster Tim Cox gave a little  lesson in how the quahogs clean themselves. He noted the good variety in sizes in the batch of quahogs on the boat, from too small to take, to stuffie size (bulls).

Mr. Cox said that without the relay program, there would be no quahogs to dig because so many people harvest them. He said they had 80 people at North Cove on one Saturday. Usually a weekend day has 30-40 quahoggers. The town issued about 300 recreational licenses to residents, 50 to non-residents, and 15 commer­cial licenses this year. Recreational diggers can take one peck a week. Commercial diggers can take up to three bushels depending on where they dig.

To learn more about quahogging in Fairhaven, visit the marine resources page on the town website at https://www.fairhaven-ma.gov/marine-resources-department or call 508-979-4023., Ext. 103. 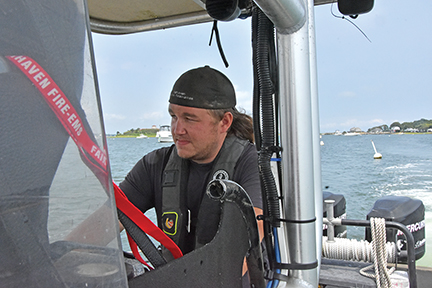 Captain Todd Cox, Fairhaven Deputy Shellfish Warden, keeps it steady as the crew returns from transplanting quahogs in Round Cove during the annual quahog relay on 7/28/22. Photo by Beth David. 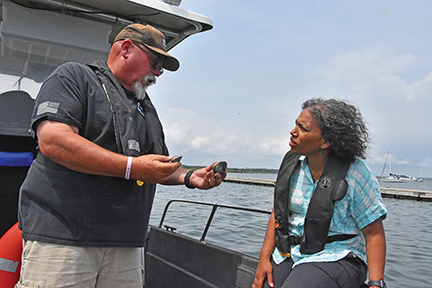 Fairhaven Harbormaster Tim Cox explains the different ways quahogs are cooked/eaten depending on size to Town Administrator Angeline “Angie” Lopes Ellison during a ride-along for the quahog relay in Round Cove on 7/28/22. Photo by Beth David. 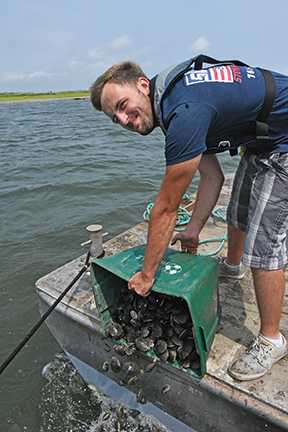 Fairhaven Deputy Shellfish Warden Corey Pitraszek smiles for the camera as he slowly dumps quahogs into Round Cove during the annual quahog relay on 7/28/22. Photo by Beth David. 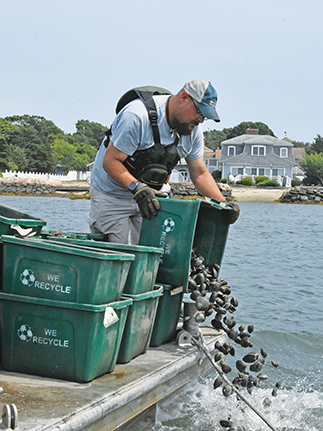 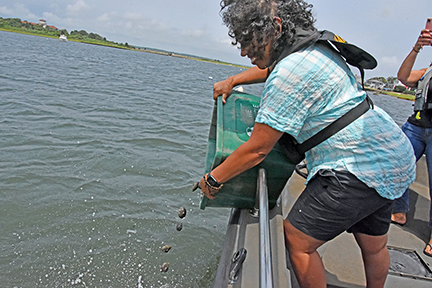 Fairhaven Town Administrator Angeline “Angie” Lopes Ellison tries her hand at the quahog relay, dumping a tote of quahogs into Round Cove on 7/28/22 during a ride-along with the Harbormaster. Photo by Beth David.