It would have made 31 years this September but Chef Stephen Lobo, who owns and operates Pumper­nickel’s in Fairhaven Village, said the time was right to sell, and he wants to try something new.

He isn’t sure what that is just yet, thoug.

“I definitely want to take a month off or so,” said Mr. Lobo. “Think about things…Travel…Go to the Caribbean with my son. Yeah, that sure sounds nice.” 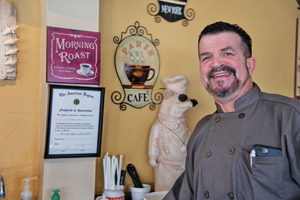 Stephen Lobo, who has owned Pumpernickel’s in Fairhaven for almost 31 years, poses next to some of the familiar decor on 4/4/19. He is selling the restaurant later this month. Photo by Glenn C. Silva.

Purchased jointly with his mother and father back in 1988, the place was known as Andy’s. About 13 years ago he bought out his parents and became the sole owner/operator.

So, what spurred the decision?

“A customer walked in to get something to eat and we got talking. They were a realtor and asked me if I was interested in selling the place,” explained Mr. Lobo.

He said it didn’t take long to find a buyer from Dartmouth. The owners of Village Café will be taking over soon. The place will be closed for a bit, while they renovate.

“They are adding a foyer section because the winds can get really cold in the winter,” said Mr. Lobo. “That’ll be a good thing. They are also adding some booths and changing things around. It’s all good.”

A graduate of Johnson and Wales, Lobo came up with the name Pumpernickel’s at the time because of the fresh bread they baked in the restaurant. 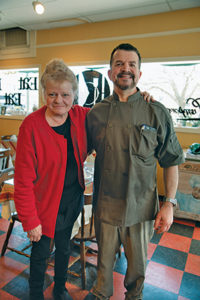 Sue Poitras and Stephen Lobo pose for a picture at Pumpernickel’s in Fairhaven 4/4/19, after Mr. Lobo announced he is selling the business after almost 31 years. Photo by Glenn C. Silva.

Long-time employee Sue Poitras, a veritable fixture at the restaurant (been there since “day one), who is also a good friend, seemed ambivalent about her next moves.

Mr. Lobo, however, is not ambivalent at all.

“I’m ready to do something else,” he said. “Sure it’ll be weird not coming into work every day at first.”

His love for cooking extends beyond the restaurant, too.

“I do a lot of phone videos and cook in my own kitchen and post them to my channel on YouTube,” he said (look for “Stephen Lobo”).

Some favorite memories include a few famous faces that have walked through the door.

“Well, Geraldo Rivera ate here,” said Mr. Lobo as he held a framed photo of the two of them at the restaurant. “Then there’s the time Anthony Quinn stopped by for a bite too.”

Ms. Poitras was quick to add: “It’s the loyal customers that make this place what it is.”

“Yeah, the customers are what makes this place,” he said.

Then he remembered something else.

“Hey, we got five Five-Star ratings in Dick White’s reviews. That’s got to say something,” he said, referring to a long-defunct restaurant review column that ran in the Standard-Times for years. 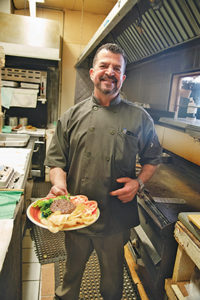 Stephen Lobo, who has owned Pumpernickel’s in Fairhaven for almost 31 years, shows off one of his lunch dishes on 4/4/19, after announcing that he is selling the restaurant later this month. Photo by Glenn C. Silva.

Mr. Lobo was also honored with an award from the Fairhaven Improve­ment Association on 4/9 for his flower boxes that brighten Center Street.

So If you’re looking for a last bite or to reminisce at a favorite eatery, or just come by to pay respects to another landmark of Fairhaven, and say hello (and good-bye) to Steve and Sue, you need to get over there soon. There is no firm date, yet, they are waiting for some paperwork, said Mr. Lobo. But it will probably change hands officially and be closed for renovations by the end of this month.

So get your favorite meal now, and say “hi” to your favorite server while you can. They are located at 23 Center Street, in the center of Fairhaven.