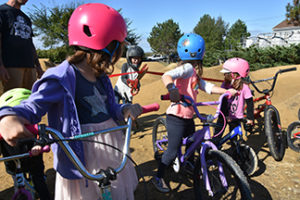 Wyatt Rotondo cuts the ribbon to open up the new pump track at Macomber & Pimental Park in Fairhaven on Saturday, 10/6/18. Photo by Beth David.

The anxiously awaited BMX bicycle pump track at Macomber & Pimental Park* is officially open for business. Organizers held a ribbon cutting ceremony on Saturday, 10/6, joined by about 30 BMX riders from toddler to adult.

Michael Rotondo, who spear­headed the effort, said he was pleasantly surprised at the support his group received from the Board of Public Works, which oversees parks in Fairhaven. The BPW gave them as much fill as they needed, he said, which saved them a lot of money. They spent $2800 on clay, though, which is an ongoing need.

The track is made of dirt fill, covered by clay that will harden over time. It needs to be periodically watered down, and the group will use the water hookup at the pump station in the park.

“When it rains, it gets beat up,” said Mr. Rotondo, adding that it will harden as it “gets seasoned.”

The pump track, made of clay, gives a different ride than the concrete or asphalt jumps, he 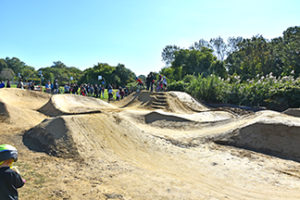 Riders gather at the top of the mound at the new pump track at Macomber & Pimental Park in Fairhaven on Saturday, 10/6/18. Photo by Beth David.

“It’s as BMX as it gets, roots-wise,” he said. “This is what we did as kids. We went out in the woods and built jumps.”

The biggest problem was over­coming the perception of BMX riders as the bad kids. But, said Mr. Rotondo, it was just a little resistance from neighbors at the beginning. After they explained what the track would be, most neighbors were okay with it, and some even helped as they worked to create it.

“It’s been a bunch of us,” said Mr. Rotondo, afraid to name names because he was sure he would forget someone.

He told the crowd that he did not have high hopes when he first proposed it to board, because, “ever since I as a kid,” he said, he got negative feedback on his sport. But the Fairhaven BPW loved the idea.

He gave a serious pitch for everyone to use helmets (it’s on the sign of rules).

“I’ve seen the best bike guys in the world fall and almost die,” said Mr. Rotondo. “You hit your head you’re all the same.”

He noted that some people look down on the sport and those in it.

“So, this is what it brings,” he said, and pointed to a line of young children on bicycles.

His son Wyatt cut the ribbon and then the kids, young and old, tall and short, hit the track.

The track is on the far western end of the park, alongside the water pump station. Behind the main track is a kiddie track with smaller hills. Some of the younger children, like two-year-old Juniper, used “strider” bikes, that have no pedals. Kids push along with their feet. Apparently, they are the new way to teach kids how to ride a bike, and better than training wheels (some say). Children learn to balance and then get the pedals.

BMX bicycles tend to be smaller for the size of the rider, allowing them to pull up and go airborne, and do tricks. 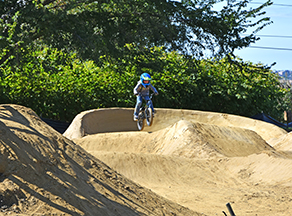 The park, on Bernese Street in Fairhaven, is open from dawn to dusk. Users of the track are asked to keep in mind that it is a quiet neighbor­hood in mind as they ride, and are especially encouraged to wear helmets at all times on the track.

The group also gave away a BMX bike in an essay contest won by Hastings Middle School student Layton Wells.

Looking at the group of boys and girls riding around the track, Mr. Wotton noted they were a bunch of kids not inside staring at a screen, but outside, engaged in a healthy activity, and not the bad actors that some neighbors had been worried about.

The track is still raising money for clay, building a fence, and main­tenance costs. Visit https://www.gofundme.com/5vj86pc to donate.