The Fairhaven Pump Track at Macomber & Pimental Park on Bernese Street in Fairhaven held a day of BMX demonstrations and fun to raise funds for the track. Activities included raffles, including some bike raffles, food and fun stuff for everyone.

According to organizer Mike Rotondo, the day raised $700 towards the pump track from the raffle/food and popcorn sales. Wyatt and Kades “Bad Boys” lemonade stand raised $80 for the Fairhaven Animal Shleter.

“Soo many people played a huge part in making it possible,” wrote Mr. Rotondo on the pump track Facebook page. “Thank you so much to all these people and everyone that came out in support of what we are doing. Hope you all had a fun day.”

The group raffled off three Kink BMX bikes that were purchased wholesale from Maul’s Bike Shop in Halifax, MA, and Circuit BMX in Pawtucket, RI.

he bikes were purchased by Fairhaven local businesses 2Loud Audio/GTS Tint Pro and Ts Auto Salon. The 20” retail is valued at $350. The 14” retail valued at $300. The fresh coat of clay for the track was provided by The United Way of Greater NB.

All leftover food was donated to the Fairhaven Council on Aging/ Senior Center.

“In no particular order except for the first. Thank you sooo much Hillary Kesner Rotondo for letting me drop all my house projects and covering for me while I spent all my time at the track. I am a lucky dude,” wrote Mr. Rotondo. “United Way of Greater New Bedford, Kevin Normore and his mum Joanne, Karen Kesner and the Kesner family, Tom Johnson, Brian Griswold and Amanda, Carrie Chandler Hawthorne and Chip, Ted Nelson, Geoff Carlton and Maximum Velocity Stunt Team, JimmyJames Ponte and Chatham Hood Bikes, Tommy Ferreira and at GTS Tint-Pro, Joe Rotondo, Brian Wotton, Vinny and the Fairhaven BPW, the neighbors of Bernese St, Vic and Cara of Circuit BMX, John Maul and Maul’s Bike Shop, Rich Daugirda, S&M and Fit Bikes, Rob Morales and Cult Bikes, Ralph at Animal, Steve Crandall and FBM Bikes, Stop & Shop, Fairhaven, Massachusetts.” 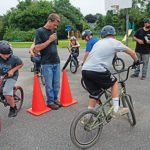 Children in the 12 and under class play a round of “Foot Down” during a demo and fun day fund-raiser for the pump track at Macomber & Pimental Park in Fairhaven, on Saturday, 8/17/19. Bikers ride in a continously shrinking cirlce, without putting a foot down, if they do, they are out of the game. Owen Shurtleff, 11, of Dartmouth (LEFT) won his round and got a hat as a prize.. Photo by Glenn C. Silva. 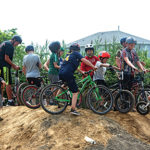 Children of all ages wait their turn at the pump track at Macomber & Pimental Park in Fairhaven during a demo and fun day fund-raiser on Saturday, 8/17/19. Photo by Glenn C. Silva. 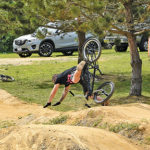 Steven Shepard of Plymouth, Mass., takes a tumble while doing stunts on the Pump Track at Macomber & Pimental Park in Fairhaven, during a demo and fun day fund-raiser on Saturday, 8/17/19. Photo by Beth David. 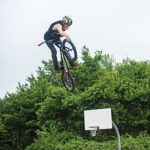 A rider gets some serious air using the temporary ramps set up during a demo and fun day fund-raiser for the pump track at Macomber & Pimental Park in Fairhaven, on Saturday, 8/17/19. Photo by Glenn C. Silva. 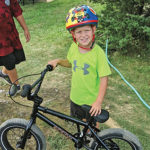 Cam Wotton poses with the 14” Kink “pump” bike he won at the Fairhaven Pump Track demo and fun day on Sat., 8/17/19, at Macomber & Pimental Park in Fairhaven. Photo courtesy of Brian Wotton via Facebook.